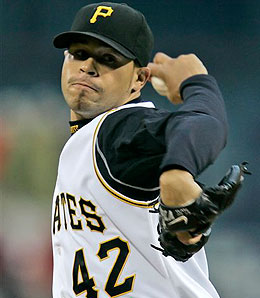 No. 18 on the list of things I never thought I’d say this year: “Boy, that Ian Snell-Jason Marquis match up sure looks like it’s shaping up as a pitcher’s duel.”

Jason Marquis is gunning for his fourth straight win this afternoon as soon as the Cubs and Pirates finish up their suspended contest from last night, a game currently in action in which the Cubs now lead 8-5.

Should they sweep the “doubleheader,” the Cubs will move into a tie with Pittsburgh for second place in the NL Central. Sure, they still have a long way to go, but there have been some nice signs of late that the Cubbies might actually have a shot this year.

Marquis has been the biggest shock yet. With four quality starts in five tries, he’s been a massively pleasant surprise. No, he still won’t K anyone (14 in 30 2/3 innings), but the reason his ERA is so stellar (2.35) is because he’s not coughing up the long ball. In 33 starts last season, he gave up 35 (small wonder I suggested his leaving was addition by subtraction for the Cards), but so far in 2007, he’s been touched up just once.

Think that will continue? Oh man. If I owned Marquis, and really at this point, he’s just starting to get picked up in deeper leagues, I’d parlay his fast start into a bottle of ketchup, if it was on the table.

Today’s opponent is Ian Snell, and nothing against Snell (who, at 5-for-5 in quality starts, is really stepping up this year and is far more likely to come anywhere near maintaining his 2-1, 1.59 start than Marquis is), but who would have projected that a Marquis-Snell match up would be considered a pitching duel.

Sign number two that the Cubs are getting their act together: Alfonso Soriano, who I recently called out for not earning his big coin, is doing his thing now. In the suspended game that’s currently being wrapped up, he has three hits, two RBI and — finally — his first homer of the season. Heading into May last season, Soriano was already inching towards double-digits dingers. Okay, so he’s been pressing for his new club. But a hitting streak that’s now stretched to 11 games certainly indicates that he’s coming around in a big way. Soriano is up to .291 for the season.

By RotoRob
This entry was posted on Wednesday, May 2nd, 2007 at 1:41 pm and is filed under BASEBALL, RotoRob, Team report. You can follow any responses to this entry through the RSS 2.0 feed. You can leave a response, or trackback from your own site.