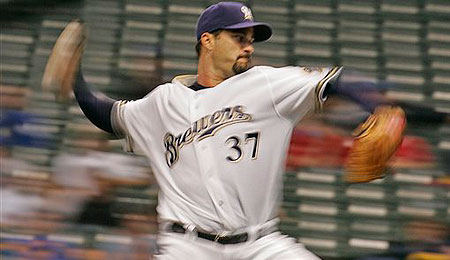 Admittedly, everything must have seemed a blur for the reeling Cards last night, but there’s no escaping that Jeff Suppan is pitching brilliantly this year.

The dude is very well likely sitting on your waiver wire, yet he’s won four straight starts and has an ERA of 2.55.

Jeff Suppan is on a major roll, and while he’s most desirable in 4×4 leagues, regardless of the format you play in, you can’t ignore what he’s been doing for the first-place Brewers (no, that’s not a typo).

David Eckstein — who’s been losing losing PT a bit lately — doubled and scored the lone run for the Cards in the third, but former St. Louis starter Suppan took care of business, getting 81 of his 117 pitches across for strikes to move to 4-2 on the season.

Even when the Cardinals were given a gift (and honestly, after what they’ve been through in the wake of Josh Hancock’s death, who is going to begrudge them that?), it didn’t work out. In the sixth, for instance, Albert Pujols (who quietly now has a nine-game hit-streak) was allowed to take first on a walk even though Suppan has only thrown three balls to him. No one seemed to notice, but it didn’t matter when slumping Scott Rolen hit into a double play to erase Phat Albert.

All told, Suppan scattered eight hits and just one walk, fanning five. He’s suddenly second in the NL in wins and innings pitched, as his fine pitching has been just one of the positives in the early going for the Brew Crew, who at 16-9 are leading their division after April for the first time since 1998.

Supplying the offense for Suppan yesterday was scorching Kevin Mench, 2-for-4 with a two-run triple, two runs and a steal; Prince Fielder, who continued his breakthrough power year with a mammoth home run and a pair of runs; and Johnny Estrada, who’s really turned it on of late, running his hitting streak to five games with a two-run double.

Suppan spent the last three years pitching for the Cards, but never had a complete game among his 95 starts with the team. In fact, you’ve got to go back 110 appearances for his last CG which came as a Pirate against, ironically, the Cardinals. So is he for real? You be the judge. Five of his six starts have been of the quality nature, but more promising is the fact that Suppan is traditionally a much better second-half pitcher. Consider that in the last three years, his ERA is a full run lower after the break (3.41 vs. 4.41). If that trend continues, the best is yet to come.

As for the Brewers, let’s not print up any playoff tickets or anything, but the first month of the year is done and the NL Central standings look like they’ve been turned upside down. The Pirates are second, at .500, three games back of Milwaukee, and every other team in the division has a losing record including the defending champion Cardinals.

Is this the season the Brewers can break a 25-year playoff drought? Like I said, no one wants to get ahead of themselves here, but consider this: the last time the Brewers enjoyed a three-game lead atop their division they were still an AL East team (May, 1987).

There’s just some rare footage going on in Beer City these days. Besides Suppan, Chris Capuano also has four wins. The last time two Brewer starters each had four wins in April? Try never. How about the pen? Francisco Cordero (who set a new club mark with 10 April saves) and Derrick Turnbow rank one-two in strikeouts among NL relievers. You get to the eighth inning trailing against these guys, and this ballgame is over.

With nine more games to go on the current 10-game homestand, Milwaukee has a chance to grow its division lead into something much more significant. By mid-May, it will be time to stop talking about what a hot start the Brewers have had and to start discussing how they are baseball’s most improved team.

By RotoRob
This entry was posted on Tuesday, May 1st, 2007 at 6:56 pm and is filed under BASEBALL, RotoRob, Team report. You can follow any responses to this entry through the RSS 2.0 feed. You can skip to the end and leave a response. Pinging is currently not allowed.