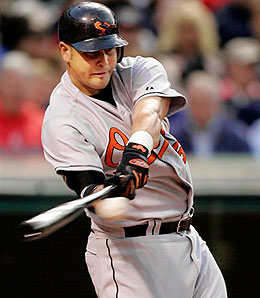 Ramon Hernandez is looking good since he came off the DL, but if you can use him to buy low on Lance Berkman, make it happen.

I just traded away Ramon Hernandez and Bob Wickman for Lance Berkman. I still have Brian Fuentes, Al Reyes, Jason Frasor and Derrick Turnbow as RPs, but I need OF help badly (I have Jeff Francoeur, Carlos Lee and Gonzo). I have two questions: will Berkman come alive soon and what catcher should I go with: Jason Varitek, Bengie Molina, John Buck or Miguel Olivo?

I am in first place thanks to your past advice!

Sweet! Another successful RotoRob reader. Feel free to head over to the Donate Now button and cough up some large coin!

I have full confidence in Berkman. The guy is one of the best overall mashers in MLB. In all honesty, I think you got Berkman cheap.

As for the catcher, Buck and Molina are the hot ones. I’d go with Buck of that group.

I am need of your advice with a big offer on the table. Someone is offering me Hideki Matsui, Edgar Renteria and Felipe Lopez for’Jake Peavy and Roger Clemens.

RotoRob likes this deal a little more than I do. Godzilla Matsui is currently hitting sixth in the lineup, is 3-for-13 with one HR and no more extra base hits, and is batting a robust .207/.385/.310. Renteria is looking very nice as a middle infielder, while Lopez is looking just about the same as Matsui. A guy hitting .276/.330/.305 with a projected 20 SBs isn’t really going to help in any area.

Peavy is a freaking stud. You’d have to offer me something very special for me to move him. Even if you want to give up a SP for some bats, I’d move just about anyone else outside of Johan Santana and Daisuke Matsuzaka. Peavy ranks sixth in the NL in ERA (1.67), second in Ks (36) and eighth in WHIP (1.05). It doesn’t get much better than that.

As for Clemens, now that’s a whole different ball of wax. I tend to really hate him from the fantasy standpoint. He just doesn’t help enough to justify drafting early on and wasting a roster spot for half the season. Seven wins and a low 3ish ERA just isn’t worth it to me.

With all that said, I would have to pass on the deal if it came into my e-mail box. Matsui looks to be having an off year, and Lopez looks middling. Renteria looks amazing, but his stats will tail off soon enough. Peavy is a certified No. 1 ace in the hole just about every time he takes the bump, and Clemens will help, but I would still have not drafted him. However, since you have him, I’d just hold what you’ve got with Clemens until he either (a) makes his plans known to us all (supposed to happen by the end of this month); or (b) someone gives you a real offer for him.

By James Morris
This entry was posted on Thursday, May 3rd, 2007 at 10:16 am and is filed under BASEBALL, Dear RotoRob, James Morris. You can follow any responses to this entry through the RSS 2.0 feed. You can leave a response, or trackback from your own site.