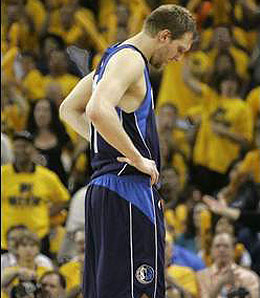 There’s not much I can add to this gem of a photo other than to say, hey, Disco Dirk, you think you deserve an MVP Award?

Well, then prove it.

MVPs step up when their team is in a hole, and Dallas is in a big hole right now.

Will Nowitzki prove he’s one of the greats, or will he choke and make Mark Cuban cry himself to sleep?

Maybe it’s not fair to judge a player on one game, but that’s the price you pay when you are an MVP calibre player.

By RotoRob
This entry was posted on Tuesday, May 1st, 2007 at 12:08 pm and is filed under BASKETBALL, RotoRob. You can follow any responses to this entry through the RSS 2.0 feed. You can leave a response, or trackback from your own site.