Panic in the Bronx 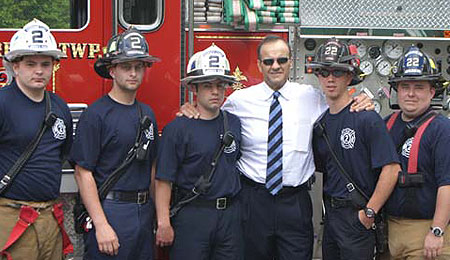 With the Yanks floundering and his job possibly on the chopping block, Joe Torre may soon need rescuing.

In case you’ve been living under a rock, the New York Yankees are is a tailspin, having dropped eight of their past nine games. But this just isn’t any slump. With a 1-5 mark against Boston thrown into that mix, the team may be entering full panic mode.

Just look at the signs:

So the Bronx Bombers are now 9-14, sitting six and a half games back of the first place Bosox. Thanks to injuries, the pitching staff is in disarray, something I worried about towards the end of spring training.

As much glee as the Red Sox fan in me extracts from the Yankees’ struggles this year, I know they will turn it around. In fact, just by pointing out how crappy they are playing, I am virtually assuring the team of a rapid turnaround (for reference sake, see what the Mariners have done since my damnation of them last week). Anyways, wasn’t it just two years ago that this team was in a similar predicament with an 11-19 start? A 10-game winning streak sure rendered that moot and the Yanks went on to win 95 games and the AL East title.

But is this the year the best team US$195 million can buy will have their run of nine straight AL East crowns snapped? Let’s examine what’s gone right and what hasn’t so far in New York, two lists that are not exactly balanced at this point, especially considering how every little that goes wrong is magnified by the media.

Jeter has spoken out in defense of Torre. General Manager Brian Cashman says he is to blame for this current mess. However, neither man is responsible for an injury situation that has made it impossible for Pettitte, Mussina and Wang to pitch together in any rotation turn yet this season. You can make the argument, as I suggested in my column last month that maybe the Yanks should have seen this coming with a house of cards rotation that has already been forced to trot Darrell Rasner out there three times, go to Chase Wright twice and bring up the team’s top prospect way before they wanted to.

You know this team is going to bash; no one doubts that. But it will soon be time to start beating the bushes for pitching help. Roger Clemens must be licking his chops right now. What a perfect scenario for him to ride in on his white horse. How may times a day to you think Cashman calls the Rocket?

By RotoRob
Tags: New York Yankees
This entry was posted on Monday, April 30th, 2007 at 2:49 pm and is filed under BASEBALL, RotoRob, Team report. You can follow any responses to this entry through the RSS 2.0 feed. Both comments and pings are currently closed.