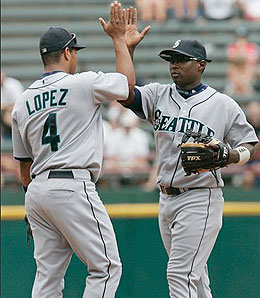 The Mariners were rained out Tuesday night and must be cursing their shoddy luck. Seattle had just snapped a six-game losing skid on Monday with a win in Texas, so it must have been itching to take on the Rangers again. After all, The Ms are 3-1 vs. Texas compared to 3-8 against the rest of their AL division rivals. I mean, jeez…how often does it rain in Texas?

So Seattle’s recent skid has dropped it to 6-9 and back to its ever familiar spot in the AL West cellar. In fact, only traditional AL doormat Kansas City is worse.

But believe it or not, Seattle is off to a better start this year than in 2006. The Mariners were playing .350 ball through April 23 last year; this year, they are a veritable lofty .400. Thanks to the rest of the AL West sucking, Seattle finds itself just 2.5 back after being 3.5 back a year ago.

Part of the reason the team is still within shouting distance is the fact that it has unbelievably lost six games already to Mother Nature. On the one hand, that’s simply kept them from losing more games than they already have; on the other hand, could you have a clearer sign that a black cloud is hanging over the Mariners’ 2007 season?

So what’s gone wrong in Emerald City so far?

Well, we can start with a moribund offense that’s dead last in the AL in runs, total bases, walks and steals (Ichiro has the only successful Mariner theft to date). Yes, the six games lost is a big factor here, but this team is struggling to score, especially early in ballgames. Manufacturing runs doesn’t seem to be one of this club’s traits either — the team has yet to lay down a sacrifice bunt. Little ball? We don’t need no stinkin’ little ball.

Then there are the stone gloves that rank 11th in fielding percentage. Yuniesky Betancourt has been the prime culprit here. Last year, he didn’t have an error in his first 31 games. This season, he bungled six balls through his first 14 games.

The main issue for Seattle, however, has been its horrific rotation. The bullpen has been pretty good for the most part (even though it took until Monday for J.J. Putz to finally bag a save, although that’s not a reflection on him), but the Mariners’ overall pitching staff has the second-worst ERA in the AL (5.50) and is by far the worst in the Junior Circuit in strikeouts (yes, the postponed games is again a factor, but the Mariners are still dead last in K/9). In fact, the only thing Seattle leads the league in is balks.

Felix Hernandez was untouchable to begin the year, but he’s landed on the DL with an elbow strain and won’t return until May 4 at the earliest. Cha Seung Baek was called up from Triple-A to replace King Felix, and even though he was the ultimate Ranger killer (3-0, 0.83 vs. Texas in his career before Monday as opposed to 3-5 vs. everyone else), naturally, he was shelled by Texas for eight hits and four runs in 4 1/3 innings.

The Jeff Weaver signing is looking like an incredible mistake. An $8.325-million mistake. Sunday, he gave up seven hits and three earned runs in three innings in what is being described as his best start of the year. It was an outing in which Weaver managed to lower his ERA by almost two runs. Just think about that for a moment.

Miguel Batista, another free agent signing this winter, is giving up almost an earned run per inning and is being battered like a step child to the tune of .321.

Horacio Ramirez, acquired for set-up man supreme Rafael Soriano in a deal many thought was a steal for the Braves, is doing his best to prove the experts right. He’s given up 14 hits and nine walks through 10 innings with a tidy 6.30 ERA.

Jarrod Washburn had a strong first start, but has regressed since, and spotty command makes him a very unattractive fantasy option. He’s been strong, relatively speaking, compared to the rest of the Mariner starters not named Felix, but that’s like saying Jack Black is skinny compared to Chris Farley.

And while the bullpen has been strong for the most part, Sean White has been tattooted and Arthur Rhodes looks like his career is toast with TJS on the horizon. Of course, how long can the ‘pen hold out while the team’s starters are barely lasting four or five innings?

So it’s time for the Mariners to send out another S.O.S. for their rotation. After last season, when they dealt away Jamie Moyer, let Gil Meche walk and decided to non-tender Joel Pineiro — they opened up three rotation spots. You’ve got to question the organization’s decision to create that big a hole in the rotation in an era where it’s easier to find Osama Bin Laden than it is to locate top notch available pitching. Sure, Weaver looked great in the postseason. That was then. This is now. Batista and Ramirez are both capable of better, but how far out of it will the Mariners be before they right their ship? And when the time comes to play double headers to make up for the postponed six pack of games, just who the hell is going to take the extra starts?

I’m not saying the three arms they let go would be doing any better, but instead of the upgrade they talked about, it’s been more a case of rearranging deck chairs on the Titanic.

I mean, things are so bad that perhaps Ryan Anderson may get a call. Remember him? The team’s top pick in 1997 was supposed to the next Randy Johnson, but after reaching Triple-A by 2000, his shoulder blew up and took his career with him. If he can’t feed Seattle’s hunger for another top starter, at least he can feed them some tasty delights — after calling it quits from baseball, he studied to become a chef and now does his cooking at his own Phoenix-based restaurant.

No, but seriously — there must be some help available here.

Good news — it may have already arrived.

Brandon Morrow, the club’s top selection last year, is being stretched out. In relief of Baek on Monday, Morrow earned his first major league victory for tossing 3 1/3 shutout innings in which he gave up just one hit. Better yet, his velocity has bounced back after dropping a few ticks since the spring. This kid is good — real good — and it won’t be long before Seattle plops him in its rotation. In fact, the Mariners should have just done so from Day One this year instead of trying to convert him midseason. Still, if you’re looking for AL pitching help, you might want to think about grabbing Morrow and stashing him if you have room.

Of the club’s other top pitching prospects, lefty Eric O’Flaherty was recalled Friday, but he’s a reliever; lefty Ryan Feierabend has enjoyed decent Triple-A results, but his control needs refinining before he’s ready for another shot at the majors; Mark Lowe looked great last year before getting hurt and surgery will keep him out until mid-season — besides, it looks like his starting days are over; lefty Tony Butler and righty Chris Tillman may have bright futures, but for now they are a pair of 19-year-olds pitching in Low A ball.

Other potential arms that could help include: Jake Woods, who many lobby for to get a permanent rotation spot; Jorge Campillo , who has pitched well in Triple-A, but he’s hardly capable of dominating major leaguers; Justin Lehr, off to a decent start, but he’s never started any of the 66 major league games he’s appeared in; and Jason Mackintosh, who pitched very well in his Triple-A debut last week.

Beyond that, the team has a couple of inexperienced arms off to good starts at Double-A, but that’s about it.

Let’s face it — if Seattle has designs on getting back to .500 this season, a lot of things have to break right. The team needs to figure out how to put some runs on the board; Hernandez has to come back when scheduled and look as good as he did to start year; Morrow needs to be converted into a starter and make an immediate impact; two of Batista, Ramirez and Weaver need to resemble average AL starters; and the team could use a surprise position player from Triple-A (Adam Jones? Wladimir Balentien? hell, maybe even Jeremy Reed?) to get hot and make a contribution with the parent squad.

Of course, that’s a lot of what ifs.

A more realistic scenario would have manager Mike Hargrove (who reportedly may have been given an extension recently) and possibly even GM Bill Bavasi axxed and the Ichiro trade watch starting by Memorial Day.

By RotoRob
This entry was posted on Wednesday, April 25th, 2007 at 2:23 pm and is filed under BASEBALL, RotoRob, Team report. You can follow any responses to this entry through the RSS 2.0 feed. You can skip to the end and leave a response. Pinging is currently not allowed.