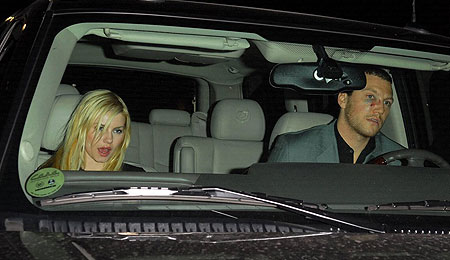 Mike wonders how many teams Ranger agitator Sean Avery can piss off. Speaking of being pissed, his hottie girlfriend Elisha Cuthbert was clearly feeling no pain when this shot was taken.

It’s yet another battle of New York…state, that is. The high-flying Sabres take on the surprisingly together Rangers in a series that should answer the question, “How many teams can Sean Avery piss off?” The Atlanta Thrashers made Avery their focal point, which was ultimately part of their undoing. The Sabres, on the other hand, played a very close (game-by-game, anyways) series with the Islanders and didn’t look like the dominant team we saw the first half of the season. The Rangers are playing a surprisingly stifling defense, and Jaromir Jagr’s army of Czech warriors are playing well.

Potential Hero: Henrik Lundqvist was back in last season’s form against a high-powered but discombobulated Atlanta attack.

Sleeper Pick: Tim Connolly’s back and getting time on the power play.

For a few games of the Devils-Lightning series, Martin Brodeur looked mortal. Then, as he is wont to do, he became the super-mega-awesome goalie god that we all know and love (or hate, depending on your perspective). As for the Sens, Ray Emery stood his ground, even when Colby Armstrong tried to run him through the net. The Sens have assumed a physical defensive game that we’ve never really seen out of them before while the Devils stifled Tampa’s big guns in Games 5 and 6 with…wait for it…a neutral zone trap. Ottawa’s deeper than Tampa and has a better defense, so the low-scoring Devils will have a tougher time getting through to Emery.

Potential Goat: Sens fans are wondering why Wade Redden makes so much money these days.

Sleeper Pick: Emery doesn’t have to match Brodeur, just maintain the standards he set in the last series.

Well, this is an intriguing match up now, isn’t it? The Red Wings defense wasn’t really tested by the Calgary Flames, and the Sharks put together some close, but convincing wins against big scary Nashville despite a slumping power play. There are many similarities between the teams in terms of depth, but San Jose is bigger and faster. On the other hand, the Detroit defense is better than San Jose’s no-name group. If the Sharks use their speed and size to wear down Detroit like they did to Nashville, it will be up to Dominik Hasek to stop Patrick Marleau, Joe Thornton and company. The thing with Hasek is that the Wings did a dynamic job of protecting him from shots against Calgary. Against the Sharks, things might just be a little different.

Potential Hero: The world (except for Detroit fans) groans as Todd Bertuzzi rounds into form.

Potential Goat: If the San Jose power play falters again, you can blame Matt Carle for not getting that breakout to work.

Sleeper Pick: Craig Rivet’s among the playoff scoring leaders. Bet you didn’t see that one coming.

Let’s see, Vancouver’s essentially a one-line team. And when the Sedin twins don’t score, well, you have what happened in the series against Dallas…except Anaheim has way more firepower and a much better transition game than the Stars. Vancouver’s obviously got the edge in goal, but Anaheim is stacked everywhere else. The Ducks can play a physical game (just ask Vancouver fans what they think about Brian Burke’s team philosophy) and they can strike extremely fast. The focus is on Roberto Luongo trying to perform more miracles against a deep, fast, and tough team with one of the league’s best power plays.

Potential Goat: If Markus Naslund doesn’t have a big series, how many Vancouver fans will call for his head?

By Mike Chen
This entry was posted on Tuesday, April 24th, 2007 at 1:33 pm and is filed under HOCKEY, Ice Chips, Mike Chen. You can follow any responses to this entry through the RSS 2.0 feed. You can skip to the end and leave a response. Pinging is currently not allowed.