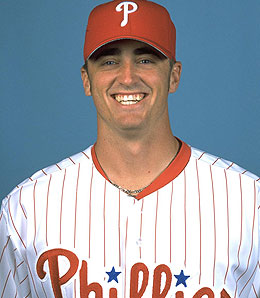 Brett Myers doesn’t have much to smile about since he was yanked from the rotation, but don’t give up on him just yet.

Question: Would you trade Brett Myers today ($3) for Erik Bedard ($12)? I’m in a deep league (15-team, 5X5 mixed keeper), and I have Myers signed to a three-year contract in which his salary will increase $5/year. Bedard is not yet signed to a long-term deal.

Both RotoRob and I think the Phillies are overreacting with Myers moving to the pen. I think he will be back in the rotation pretty soon and should come around before long. But, if he does come back and continues to bomb out, it could be the end of starting for the season.

Now, I think I would just hold what I’ve got with Myers. Moving him for Bedard doesn’t help since Bedard really shouldn’t be starting games for your fantasy teams anyway. An ERA of 5.40 and a 1.54 WHIP = cut in a lot of leagues. I think Myers moves back into the rotation before the end of May and should be okay from then on. (Of course, another option is that Myers takes Tom Gordon’s job and has plenty of value; something to think about, anyways.)

I have Howie Kendrick. Should I pick up Ryan Theriot or Kelly Johnson to replace him?

I like Theriot and his speed. Johnson just doesn’t have the consistent game-to-game stats that I want to see from my 2B. I would go for Theriot.

I’ve been pretty much in the top three of my league so far. However, I am last in home runs. Two of the culprits are Lance Berkman and Ryan Zimmerman. Can you look into your magic ball and tell me if they will start to hit before’gas hits $4.00/gallon? Before Jackie Robinson’s 60th anniversary party? Before’the old guy on Sunday Night Baseball pronounces Carlos Beltran’s last name correctly?’

For starters, I’d say you won’t have to worry about gas prices as soon as the U.S. takes over the Middle East altogether. Whether that happens before or after we celebrate 60 years since baseball stopped its bigotry is another question altogether. I guess that depends on when the draft is instituted so the Army can send anyone aged 14 to 44 over there. As for Jon Miller, I try to mute Sunday Night Baseball whenever possible. I can’t stand listening to Joe Morgan belabour a point for three innings and Miller accentuate random words.

As for your baseball-related issues, I wouldn’t worry about Berkman as he is in the top ranks for fantasy hitters every single year. Zimmerman is young and a keeper for sure. Just drop him and see how fast he gets snatched up in your league.

On a separate note, if you are judging your fantasy season at the end of April, you’ve got a long season ahead of you. Don’t worry about guys who are not hitting this early (who have a track record of success), they will come around.

Another offer out there: I have been offered Greg Maddux for Brian Giles. Also, I was offered Ryan Freel for El Duque.

That depends on how bad you need pitching. Freel has been and will continue to lose playing time to Josh Hamilton. The Reds have been just looking for a reason to get Hamilton more time on the field and Freel has been struggling.

Giles will get you a boost in BA and OBP, but even the OBP is dropping. Maddux should do fine in Petco field and hitters traditionally do worse there. I’d move away from Freel and, depending on who your other OFs and SPs are, I would look at dealing for Maddux.

By James Morris
This entry was posted on Wednesday, April 25th, 2007 at 4:00 pm and is filed under BASEBALL, Dear RotoRob, James Morris. You can follow any responses to this entry through the RSS 2.0 feed. You can leave a response, or trackback from your own site.