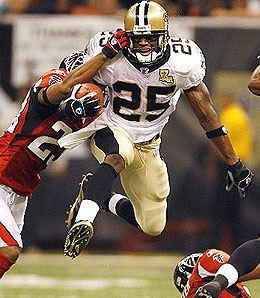 With Fantasy kingpins like Reggie Bush calling the NFC South home, the division is in fine shape.

As the kids say in the streets, the NFC South is poppin’. Having produced at least one team in the NFC Championship game in five straight seasons, the South is the conference’s deepest and best division. With players like Reggie Bush, Steve Smith and Warrick Dunn calling this division home, excitement will be abound. However, these teams figured it was the right time to address issues at quarterback. The Saints were the only team in the division that felt comfortable with their quarterback situation. Everyone else? Not so much.

The Skinny – The best quarterback for the Falcons may be playing for the Texans this season. Schaub left via trade to Houston and left the Falcons without a secure number two quarterback (although, I would have driven Schaub to Hartsfield International Airport personally if I was being offered to switch picks in the first round and getting two second round picks to boot). Meanwhile, new head coach Bobby Petrino wants Michael Vick to improve his completion percentage above the 60 percent clip (okay, you can stop laughing now…no, really…stop it…look I know the thought of Vick doing that is laughable but it could happen…okay, enough really…you’re not helping). Seriously, Harrington is not the answer as the backup. People used Schaub as an emergency spot guy when Vick got hurt in previous seasons. I don’t see many fantasy owners going out of their way to add the maligned Harrington to the roster. Also, keep an eye on those defensive losses. They lost Kearney, Hartwell, Reese (who is not great but provided depth) and Mathis. Unless they upgrade in the draft, their defense could suffer without Kearney’s ability to rush the quarterback. He didn’t have a great year in 2006 (played in only nine games and had 4.5 sacks) but proved in the past that he could get to the passer.

The Skinny – The only ripple the Panthers made in free agency came with the Carr move. This acquisition was a necessity because of two issues. First of all, Weinke could not get it done as a back-up quarterback when Jake Delhomme got injured. Secondly, is Delhomme capable of getting it done in Carolina? As evidenced by his commercials with Bojangles’, his accuracy is a problem. I’ve never been a big supporter of Delhomme to begin with, but if he’s going to whip burgers at me, it won’t help. Factoring in his erratic history, it’s difficult to trust anything related to the Carolina quarterback situation. Just ask Steve Smith.

The Skinny – The Saints quietly addressed a few of their needs in free agency. In fact, they were so quiet that the biggest news of the offseason may be that Reggie Bush was banned from the Playboy mansion…or was he? Anyway, Johnson may be an upgrade from Mark Campbell, Ernie Conwell and Billy Miller at tight end if he remains healthy. Staying with the receiving department, Horn’s loss may be felt more off the field than on since he was a fan favourite. In reality, Horn’s play slipped the last few seasons. His receptions have decreased the past two years and he owns just five touchdown catches over this span. Teams will be ready for Marques Colston this season, but at 35, Horn’s time in New Orleans was up. Speaking of someone’s time who should be up, can the Saints address the atrocity that is CB Fred Thomas? I mean, the man is only a human turnstile, that’s all. Simmons and Kaesviharn are decent additions but shouldn’t they attack the corner position? I guess that’s why they have that draft thing.

The Skinny – June’s signing will help an aging Bucs defense, however there was another area that needed attention. The ruptured spleen of Chris Simms from last year helped set the tone for Tampa’s offseason as it addressed the quarterback department through free agency and trade. The Bucs traded for Plummer, but he decided to call it a career instead of being in a training camp competition (by the way, in case you wanted a nine minute Jake Plummer tribute here it is…in a word, disturbing). So, Simms will compete with Garcia for the starting job. With Tampa’s set of skill players, the quarterback position is not desirable for fantasy owners…unless they get Calvin Johnson in the draft who would immediately become one of the five greatest Buccaneer wide receivers ever without taking a snap. On a sidenote, have you ever really studied Tampa’s history with backs and receivers? It’s terrible. I’d type some of the names from previous Bucs teams but I’d probably would be fired for using bad language on the site. [Editor’s note: Not a chance, Derek…go ahead and swear a blue streak!]

By Derek Jones
Tags: New Orleans Saints, NFC South, Reggie Bush, Steve Smith, Warrick Dunn
This entry was posted on Monday, April 23rd, 2007 at 11:39 am and is filed under Derek Jones, FOOTBALL. You can follow any responses to this entry through the RSS 2.0 feed. Both comments and pings are currently closed.