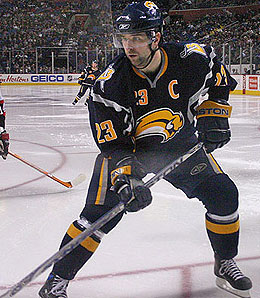 As usual, Chris Drury came up huge for the Sabres as they added to the Isles’ frustrations in the first round.

The Buffalo Sabres hung on Friday night to edge the Isles 4-3, advancing to the second round of the NHL Playoffs.

Up 3-1 in the series and leading 3-0 through two periods, Buffalo looked well on its way to clinching a playoff series at home for the 10th time in franchise history (but first since 2001). But the Isles, who somehow miraculously edged into the postseason by winning their final four games, would not go quietly.

They outshot Buffalo 18-5 in that final frame, and key saves against Alexei Yashin and ex-Sabre Miroslav Satan by Ryan Miller in the dying seconds helped Buffalo hang on to take the series in five games. (Mike, by the way, pegged this one perfectly.)

Now the Sabres will play either the Rangers or Lightning in the second round, depending on what happens in the rest of the Tampa Bay-New Jersey series.

For most of the key Sabres’ top first-rounder performers, including Daniel Briere, Chris Drury and Dainius Zubrus — taking on their other New York state rival would be preferrable to playing Tampa Bay.

Well, to be fair, Briere probably doesn’t care. He shredded both teams for three goals and three assists in four games during the regular season before scoring points (1-4-5) in all five games of the series against the Islanders.

For Drury, however, a series vs. the Rangers would be a much better match up. Mike was again on the money picking Drury as the potential hero in the first round, and he didn’t disappoint with 4-1-5. During the regular season, Drury killed the Rangers (4-5-2-7), but was middling against the Lightning (4-2-0-2). As for Zubrus, who tallied five assists against the Isles, he didn’t fare well against either potential second-round opponent (4-0-1-1 vs. New York and 1-0-0-0 against Tampa Bay).

On the flipside, Miller, who was spectacular in the opening round (2.21 GAA), is probably pulling for the Lightning to rebound and take out the Devils. His record against TB (3-1, 2.01, .931 SV%) was vastly superior to his mark against the Rangers. Although Miller was a perfect 3-0 against the Strangers, he had his difficulties (2.91 GAA, .899 SV%).

For the Isles, making it to the playoffs was an unexpected bonus after their late-season collapse. But now they likely face the prospect of losing trade deadline acquisition Ryan Smyth, an unrestricted free agent this summer. Jason Blake can also walk. To afford to keep them both, the Isles would likely have to buy out Yashin. And after five straight opening round playoff losses, New York has now gone longer since winning a playoff round than any other team (that’s been in existence that long) other than Winnipeg/Phoenix. The Isles’ last playoff series win? Try 1993.

The team suffered a loss just before the final game when defenceman Sean Hill got nailed with a 20-game suspension for steroid use, forcing rookie Drew Fata to see action for the first time in the playoffs. Doesn’t owner Charles Wang’s company produce some kind of software to help make the detection of steroids impossible? Get on that, guys. There’s a great market for that kind of thing among professional athletes.

Victory over his ex-employers sure would have been sweet for Isles coach Ted Nolan, but instead, it’s back to the drawing board to try to figure out how to guide this team past the first round for the first time in a decade and a half.

By RotoRob
Tags: Buffalo Sabres
This entry was posted on Sunday, April 22nd, 2007 at 2:53 pm and is filed under HOCKEY, RotoRob. You can follow any responses to this entry through the RSS 2.0 feed. Both comments and pings are currently closed.