Fouls Hold Flash Back in Game One 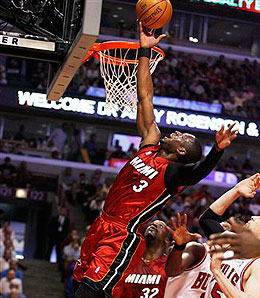 Flash came up big in the fourth quarter, but it wasn’t enough.

Dwyane Wade keyed an impressive late-game comeback, but couldn’t quite drive the Heat past the Bulls in Game One on Saturday afternoon.

Despite Flash’s flashy new limited edition Converse WADE 2.0 shoes, Miami went down 96-91 to Chicago as foul trouble limited Wade to just 33 minutes. He scored nine of his team-high 21 points in the fourth quarter even though he had to sit down after picking up his fifth foul early in the final stanza.

Wade sunk just 7-of-16 and missed his only trey, an ill-advised shot with Miami still within striking range after coming from nine back to cut the deficit to one in the final minute.

After being held out of the season finale to rest him for the playoffs, this effort was a bit disappointing for Wade. He turned it over five times and didn’t contribute much else, dishing just three dimes and pulling down only two boards. Combine that with Shaq’s early disqualification because of fouls and Luol Deng’s exorcism of last year’s playoff ghosts, and you’ve got the Bulls just three wins away from ensuring that a new champion will be crowned in June.

There’s no love loss between these two teams, especially after Miami knocked the Bulls out last year en route to its first NBA Championship. Chicago is driven to do its part to guarantee the Heat’s reign ends after one season. I find it hard to imagine that this series won’t go the distance, and I still believe Miami will prevail, but Shaq (27 minutes) and Wade will need to stay on the court for that to happen.

I mean, how big a difference does Flash make to the Heat? Miami is are +91 points for/points against when D-Wade is on the floor, but -166 when he isn’t. Miami needs Wade playing close to 40 minutes per game if it plans to kick the Bulls to the curb again.

By RotoRob
This entry was posted on Saturday, April 21st, 2007 at 7:48 pm and is filed under BASKETBALL, RotoRob. You can follow any responses to this entry through the RSS 2.0 feed. You can leave a response, or trackback from your own site.