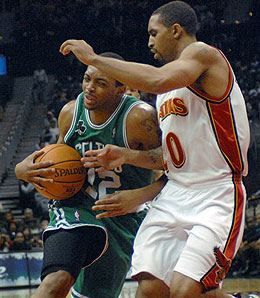 An ankle injury to Salim Stoudamire, right, has rendered him useless for the remainder of the season.

When setting your lineups for the final period of the season, the key stat you should be looking at now is wins, as in which teams still have something to play for. Those still in playoff contention or jockeying for positioning will keep running out their starters and that’s what you need right now. Utah, for instance, remains in a dogfight for home court advantage so it continues to play predictable lineups, hence Carlos Boozer’s big game last night. We explore this further in today’s Daily Dose.

Dallas is in rest mode, and last night was Jason Terry’s turn to miss his first game of the year; Cuttino Mobley’s shooting touch is back in the nick of time; RJ bounced back nicely, but his PT, as well as the other big two on the Nets, could be cut; James Jones is still starting for the Suns, but is not being productive; Matt Harpring has taken over the SF job in Utah; and Gerald Wallace could have to miss another game tonight.

We’ve got all these stories and so much more in today’s Daily Dose.

As a final note, I have been remiss in tipping my hat to my all-time favourite author, Kurt Vonnegut Jr., who died earlier this week. His work had a profound impact on me during my formative years. If you’ve never read any of his novels, do yourself a favour and get to it.

By RotoRob
This entry was posted on Saturday, April 14th, 2007 at 3:35 pm and is filed under BASKETBALL, NBA Daily Dose, RotoRob. You can follow any responses to this entry through the RSS 2.0 feed. You can leave a response, or trackback from your own site.