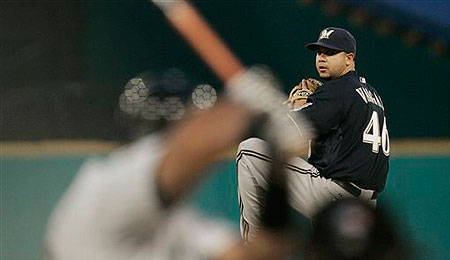 Don’t be so quick to dump Claudio Vargas, who held the Fish in check.

I’m allowed four bum moves in first half of season.’Depending on how Claudio Vargas does Tuesday, I’m inclined to cut him loose. Which of these four would you take (if any):

Vargas pitched extremely well on Tuesday, so I might want to hang on to him. If your deadset on ditching him, though, I’d snatch Hirsh up. I think he is a bit of a sleeper. Gonzalez gives up too many long balls and it will get worse as he pitches in Arizona more. Mitre is an iffy No. 4 starter in the majors — not really very useful from a fantasy standpoint. Owings is someone to watch, but take his five scoreless inning debut with a grain of salt — it was against the Nationals, after all. I could run out there and go home with a 3-ish ERA with the Nats taking hacks at my stuff.

I’d wait for a few starts to see who is the real deal and who had a hot start. Don’t let the first week or two of the season dictate your waiver wire additions and drops. Give the guys some time to settle down and settle in.

By James Morris
This entry was posted on Friday, April 13th, 2007 at 10:44 pm and is filed under BASEBALL, Dear RotoRob, James Morris. You can follow any responses to this entry through the RSS 2.0 feed. You can leave a response, or trackback from your own site.