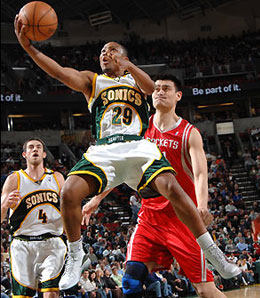 Mike Wilks suddenly finds himself as the main PG in Seattle with both Luke Ridnour and Earl Watson hurt.

In the final installment of Position Battles for the 2006-07 NBA season, we run down some quick playing time issues to watch for in the last week before the playoffs.

We’re still waiting to see Boris Diaw get his act together, but his job sounds like it’s in jeopardy; and Mike Wilks of all people suddenly finds himself with some value.

Not only do we cover these situations and many other fantasy basketball related issues in this week’s Position Battles, but we also provide a handy how-to guide for when you’ve got a lady spending the evening and she has no sleepwear.

By RotoRob
This entry was posted on Wednesday, April 11th, 2007 at 2:39 pm and is filed under BASKETBALL, Position Battles, RotoRob. You can follow any responses to this entry through the RSS 2.0 feed. You can leave a response, or trackback from your own site.