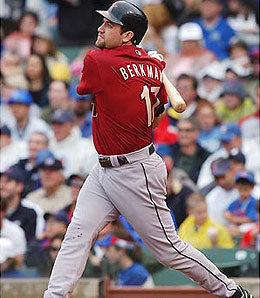 First off, my apologies for the lateness of this. It couldn’t be helped. But the good news is that going forward, the rankings will be done on a more frequent basis as new RotoRob contributor Tim McLeod has generously agreed to do them for me. Expect more regular and deeper rankings than we’ve had in the past. Anyways, let’s get to it.

You have every right to expect monster numbers out of your first baseman. I mean, slick-fielding first sackers like Doug Mientkiewicz are all fine and dandy, but point me in the direction of the last fantasy league title won that included Dougie as its main first baseman. Note that unlike in many other first base rankings, you will not find major mashers like David Ortiz, Travis Hafner, Jim Thome and Frank Thomas listed here. Didn’t play 20 games at first last year? Go find another list to appear on, dude.

1. Albert Pujols, STL — Many argued ‘ and they had a valid case ‘ that Pujols should have earned his second straight MVP last year. Well, you can rest assured that more hardware will be coming his way. Assuming he avoids injury this season, Pujols will put up some absolutely sick numbers, as pitchers simply can’t find a way to get him out on a consistent basis.

2. Ryan Howard, PHA — Okay, admit it. He’s surpassed all our wildest imaginations. I doubt he can repeat last year’s simply silly numbers (especially in the BA department), but even at, say, 85 per cent of the production, he makes a damn fine addition to your club and earns a slam dunk in the two-hole of this lineup. Besides, now the Phillies have Wes Helms to offer protection for Howard. Yes, I jest.

3. Lance Berkman, HOU — Lost behind the brilliance of Pujols and Howard was the fact that steady switch-hitting Berkman enjoyed career highs in homers and RBI while batting an acceptable .315 last year. I don’t expect quite as many dingers this year, but he’ll never disappoint with his high average and top notch run production. You’ve got to love the OF qualification as well.

4. Justin Morneau, MIN — By improving his contact rate and finally staying healthy, Canada’s top slugger was at last able to deliver on his long-promised potential. Morneau’s overall development as a hitter last year was truly remarkable. Not yet in his power prime, there’s no reason to believe that Morneau can’t approach 40 homers and continue his top-drawer run production, but another .320+ year might be a stretch.

5. Paul Konerko, CWS — More doubles and less homers last year? So friggin’ what? Konerko enjoyed his finest season yet, setting a new personal best in BA, SLG and OPS. I doubt he hits .313 again, but .300 and another run at 40 homers or more is quite a reasonable expectation. And it’s pretty darned valuable, too.

7. Carlos Delgado, NYM — Everything is relative ‘ he was still a major fantasy factor ‘ but Delgado’s numbers slipped in his first season in New York. His BA, for instance, was at its lowest in a decade. However, in following his recent career trend, look for him to rebound this season with a BA closer to .300 and an OPS in the high 900s. Delgado’s power stroke remains constant, so you can expect his usual 35 to 40 homers. This dude is money in the bank.

8. Prince Fielder, MIL — Are you ready for a new member to the upper tier of slugging first basemen? Well, you better be, because Prince is ready to join the club. I’m expected him to be a more consistent threat throughout the year will be shocked if he doesn’t put up his first of what I expect to be many 30-homer seasons.

9. Derrek Lee, CHC — A breakout 2005, followed by elevation to first-round status in last year’s drafts left a lot of owners in the lurch when a horrible wrist injury held Lee to just 50 games in 2006. He’ll obviously slide in the rankings after such a down year, but four dingers in 44 September at-bats and a strong start this spring suggests he’ll be fine this year.

T10. Jason Giambi, NYY — Despite a nagging wrist injury down the stretch, Giambi enjoyed an impressive resurgence in the power department. He continues to be a fantastic asset in OBP leagues.

T10. Todd Helton, COL — Helton has lost almost 300 points of OPS since his peak at the beginning of the decade, yet he still hit over .300 with an OBP of over .400 and a .476 SLG last year. I guess, it’s all relative, isn’t it? But at 33, and with a history of serious back problems, Helton’s definitely trending in the wrong direction and he was really exposed in his games away from Coors last season (781 OPS). Long-term owners should take solace in the fact that Helton is apparently healthy this spring.

T10. Adam LaRoche, PIT — Fresh off a major breakthrough season in which he was among the top hitters in the NL after the All-Star break, LaRoche has found himself in new surroundings after a deal to Pittsburgh. Is that worrisome? Not a chance. He’s now a key component of a revitalized Pirate attack and given that 21 of his 32 dingers last year came on the road, I can’t see LaRoche collapsing upon leaving Turner Field.

13. Adrian Gonzalez, SD — An injury to Ryan Klesko opened the door for Gonzalez to finally get a full-time job, and he emerged as the most dangerous hitter on the Padres. He flashed power he had only hinted at as a minor league, batted over .300 and displayed fine on-base skills.

14. Lyle Overbay, TOR — Overbay impressed the hell out of me in his first season with Toronto. I always knew he could hit, but he looked so locked in at times and showed way more power than I expected. Overbay has struggled this spring, but I think he still may have more untapped power in that bat.

15. Richie Sexson, SEA — Sexson’s runs and RBI dropped significantly last year in a weaker Mariner offense, but he remains a top-notch source of power. The big man is struggling this spring, but bear in mind that he scuffled last season until around June before beginning to mash.

Bubbling Under: Nick Johnson, WAS — Johnson finally enjoyed moderate health last year and came through with his long-awaiting breakout season, enjoying personal bests in virtually every category. Of course, a broken leg ended it a wee bit early and Johnson ‘ ever the slow healer ‘ has had complications with the leg that will keep him out for a couple of months or longer.

Sleeper: Conor Jackson, ARZ — Jackson has a chance to develop into a solid young power hitter, and I believe he’s poised for a major jump forward this season. In the second half last year, he hit 40 points higher while slugging .485. He will not come cheaply again.

Deep Sleeper: Casey Kotchman, LAA — Kotchman is off to a blazing start, but the key for him really — as it always has been ‘ is health. Once considered among the best prospects in the game, many have forgotten about Kotchman because of his string of injuries. But this kid is just 24 years old and has the raw ability to rake (.325 career hitter in the minors).

Rookie Watch: Joey Votto, CIN — There aren’t really any impact players at first base who are beginning the season in the Show, so we’ll look to the minors for a player who could emerge as a big-time rookie this season. Scott Hatteberg isn’t a huge roadblock for Votto, the slugging Canadian who will begin the season in Triple-A, but could mash his way to Cincy in short order. He just missed setting a Southern League record last season with 46 doubles and you can bet many of those will turn into dingers as he matures.

Prospect: Daric Barton, OAK — All he needs is a good bout of health and one of the A’s top prospects will soon be hitting frozen ropes in the majors. I expect Barton to develop into a .300-hitting solid run producer with modest power. If he doesn’t have a full-time gig in Oakland by the start of 2008, I will be shocked.

By RotoRob
Tags: Doug Mientkiewicz
This entry was posted on Thursday, April 12th, 2007 at 7:47 am and is filed under BASEBALL, Cheat sheets, RotoRob. You can follow any responses to this entry through the RSS 2.0 feed. Both comments and pings are currently closed.