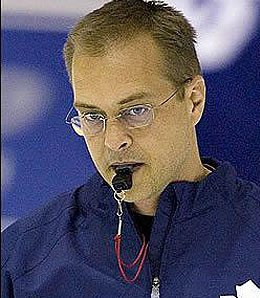 I’d hate to be this dude if Toronto doesn’t beat Montreal tonight.

Welcome to the latest feature on RotoRob.com. We’ll spend the day watching sports on television and report what we see in real-time. It should be a lot of fun and perhaps even offer some valuable insight. Let’s get to it.

2:45 p.m. – Curling is on. Okay, I admit it. I’m a bad Canadian. I mean, I like back bacon and beer and hockey and all, but simply can’t get into this sport. I’ve actually tried it once or twice, and it’s one of the few games that you can excel at even while hammered, so I won’t say anything bad about it. Once upon a time, in the days before TSN, etc., curling on CBC was one of the few sports available on the tube, so you didn’t have much of a choice. Today, I do have a choice. And I choose to flip on.

2:55 – Some golf retrospective is on CBS. Man, I like playing golf, but I can’t watch it live, never mind watching people talking about their classic putts. Next!

3:01 – A preview of the huge Leafs-Habs game tonight. Toronto needs to win in regulation and get some help to make the playoffs. For Montreal, it’s basic — win and it’s in. This is being billed as the biggest game between these two age-old rivals in 40 years.

3:07 – Raptors coach Sam Mitchell, being interviewed after last night’s win over Philly (which, coupled with NJ’s loss, clinched Toronto’s first ever division title), talking about Chris Bosh’s play of late: “Last month, you can’t ask anymore of Chris.” I’ll say. He’s had seven straight double-doubles, last week taking over the career franchise lead in that department. So far in April, Bosh is averaging 24.8 PPG, topped only by January’s 25.4 average. He’s averaging 12.5 RPG and 1.5 SPG (how about four last night?), his best totals so far this season. If he doesn’t garner some MVP votes, there is something wrong. No, I’m not saying he should win it…I’ve already had this argument with a reader recently, just that he deserves to be discussed.

3:36 – Sorry for the delay…I somehow managed to pop one of the keys off of the Rotowidow’s laptop. D’oh! So there’s some kind of skiing special on TSN now. Pass.

3:39 – There’s a motocross show on the Speed Channel. Honestly, I don’t think I’ve ever watched this channel. I won’t be starting today. Flip.

3:41 – Fox Sports World has soccer on. Every single time I put this channel on, it’s soccer. You don’t care do you? Me neither.

3:46 – Maple Leafs coach Paul Maurice is looking very relaxed in an interview discussing tonight’s game. Whatever, dude. Don’t try to tell me you’re not a big bowl of jelly inside.

3:50 – NBA TV is doing its post-game wrap of some European women’s championship game. Real sorry I missed that. Coming up…a recap of the WNBA title game. Run away.

4:03 – Ultimate fighting on Spike. Ah! That’s more like it. Let’s watch two people beat the shit out of each other. Isn’t there any hockey on?

4:13 – Soccer on with English commentary. Milan is playing Empoli, and up 3-1 with less than five to play, it looks good. Except I still don’t like it.

4:17 – Master’s third round. Vaughn Taylor just missed a putt on the sixth green that I’m pretty sure I could have sunk. I feel a bit better.

4:20 – Joe Thornton takes a slashing penalty to put his team in a real hole. The Sharks already trail Vancouver 2-0 less than six minutes into the game. He’s only taken one minor penalty in the last 10 games, though, so we’ll cut him some slack. The Sharks kill the penalty and Thornton keeps playing a physical game, opening up space for Jonathan Cheechoo.

4:30 – The U.S. Open Cycling Championships is on NBC. An American and a Canadian are running one-two and apparently, that’s somewhat of a surprise. Not to me, as I had no idea what to expect.

4:39 – Braves-Mets. Kelly Johnson slides head first on a steal attempt and gets shaken up. Uh oh. If the Braves have to trot Chris Woodward back out to second, they are in trouble. He looked like a corner infielder last night, that’s for sure. Atlanta leads 2-1 in the bottom of the second as it tries to hand New York its first loss of the season. In fact, this is the first time the Mets have even trailed this year. Those bastards.

4:52 – Just checking out the schedule of games in the NHL tonight. One game that won’t be worth watching is Florida vs. Carolina at 7 p.m. The Hurricanes have accomplished the rather dubious distinction of becoming the third team in league history to win the Stanley Cup and then fail to make the playoffs the following season. Of course, if they want advice on how to take missing the postseason, they could get some expert tips from the Panthers. They’ll be watching the playoffs from the sidelines for a sixth straight year. So what went wrong for Carolina this year? For starters, the team did not help itself at the trade deadline in the way it did last year. Anson Carter as their key acquisition? Please. He scored last night for his first point as a ‘Cane — in 10 games. Not exactly the impact Carolina had hoped for. Carter scored a career-high 33 goals last season and he has exactly one-third of that total this year.

5:04 – Of course, Edmonton, the team Carolina defeated for its Stanley Cup last season, is also out this year, so we’ll have two brand new teams squaring off no matter what happens. The Oilers face provincial rival Calgary at 10 p.m. EST tonight in a game that does matter to the Flames. They are desperately trying to clinch the final seed in the Western Conference and hold off Colorado, which is a simply obsence 14-1-2 since February 25. Wouldn’t Edmonton love to stick it to Calgary tonight? The Flames will lean heavily on Jarome Iginla, who’s doing his part lately with five goals and four assists in the last four games.

5:13 – J.S. Giguere was away from the Ducks last night when they lost 2-1 to Dallas in a shootout, losing out on a chance to clinch their division. Don’t blame Ilya Brzygalov for the loss last night as he saved 29 of 30 shots. He’ll be between the pipes again tonight against Columbus as Giguere, whose wife just pushed out a kid, won’t return to the team until Monday.

5:19 – Ah, some women’s sports I actually enjoy. The IIHF Women’s Championships pits Canada vs. the U.S. What a shock! These two countries have a death grip on women’s hockey like no other countries and no other sports. They completely dominate the game and have a tremendous rivarly that makes for fantastic watching. Besides, Cassie Campbell is commentating. Mmmmm….Cassie Campbell. The Americans are winning the little battles and lead 2-1 at the end of one. Canada needs to tighten things up after blowing an early 1-0 lead.

5:35 – Speed is now showing drag racing. It’s actually kind of fun, but the strategy is lost on me.

5:40 – Soccer is on Fox Sports World. Big shocker there. Wigan, which apparenty sucks, is beating Bolton 1-0.

5:44 – Leafs TV is showing highlights of the October 7 Toronto-Montreal game, won by the Habs in a shootout. Way to inspire the home crowd, guys!

5:48 – Xs and Os is on Raptors TV and they’re giving the scouting report for Kevin Garnett. This is a great show to learn the real subtleties of basketball. They do a good job…I should watch this more often!

Okay…time for me to start cooking dinner before the RotoWidow beats me to within an inch of my life. Enjoy the games for the rest of the day and this evening!

By RotoRob
Tags: Toronto Maple Leafs
This entry was posted on Saturday, April 7th, 2007 at 2:50 pm and is filed under BASEBALL, BASKETBALL, Channel Surfing, HOCKEY, RotoRob. You can follow any responses to this entry through the RSS 2.0 feed. Both comments and pings are currently closed.