Dear RotoRob: Save My Bullpen 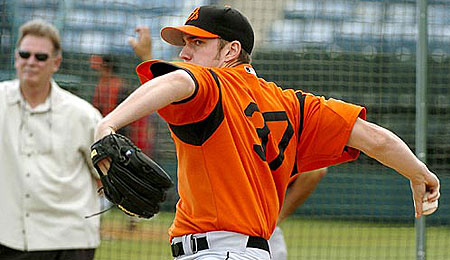 Dear RotoRob.com,
‘
I just got done with my 5×5 auction-style Rotisserie draft. I drafted a squad deep in hitting and SP at the expense of saves. I have’a solid’option in Chris Ray, but after that things are looking quite shaky. I have Seth McClung (ugh) and several set-up men: Mike MacDougal, Bob Howry and Fernando Rodney. Are’either Rodney/Howry worth dropping for guys like Todd Coffey, Brian Wilson, Rafael Betancourt, Fernando Cabrera or Al Reyes? I am hoping I get lucky and one of these guys emerges as a closer due to their shaky closer situations.

I think McClung is a high risk/high reward candidate this season. If he can harness that talent of his and hone in that fastball, he could surprise some people. Now, do you drop one for the others…I would just hold what I’ve got right now. Wait a week or two and see who emerges on some iffy teams and pick them up. I’d look at Akinori Otsuka from Texas just because I don’t trust Eric Gagne (with good reason ‘ he’s going to start the year on the DL). The other guy I have my eye on is Dan Wheeler from the Astros. Brad Lidge is going to go Lidge and Houston will replace him with Wheeler.

What do you think of this trade: I give up Hanley Ramirez, Ryan Howard and Chris Young, and I get Reyes, Lance Berkman and Salomon Torres?

Next time, please ask before making trades. Let’s just break this down by player.

Ramirez: I rank Ramirez at about No. 5 for shortstops. He is a legit five-tool talent who could up his ’06 power numbers this year. He has a quick bat and quick feet which suggests to me that you can count on him putting up a consistent line of BA, steals and runs.

Howard: A freaking masher! Howard is a legit top three pick among hitters. I take Albert Pujols over him, but I could easily go Howard No. 2 for hitters. Now, that being said, there is no way on God’s green Earth that he tops his 58 HRs from last year. I want more for in a deal than Berkman and Reyes for Ramirez and Howard.

Young: His heater isn’t all that hot. But, his 6’10’ frame gives him leverage that not many others have. It makes those weak heaters look like 100 MPH pitches to the hitters. Young has not been overworked, is pretty smart with his pitches, and throws in the league’s toughest HR park. I like Young as a sleeper.

Berkman: I don’t think he equals his HR total from last year, but with Carlos Lee hitting behind him I’d say close to 40 is where he ends up. Since he qualifies in the OF as well as 1B, he has some added value in mixed leagues. But, I still take Howard.

Torres: Matt Capps is the real closer in Pittsburgh. Torres will have first dibs, but it won’t take much for Capps or even Damaso Marte to step in and close games for the Pirates. I take around 23 RPs ahead of Torres and think he is more of a bust than a sleeper.

Now, where do I end up on this? I stand pat with Ramirez and lose about 20 steals, but gain about 15 HRs and 30 RBI with Howard over Berkman. I’m not even sure why you went from Young to Torres unless your relief pitching is just that bad. I think you lost in this deal and the other guy got Christmas in March.

I’m in an NL-only league with these categories: W, ERA, WHIP, SAVES, Ks.

Which one of these pitchers do you like the best for this year?

If I have to pick between those two guys I run with Bush.

Young: As discussed above, because of his height, he has the leverage to make his fastball look much faster than it is. Young has had a pretty light workload and he is smart with his pitch location. Pitching in Petco is great for him and the Padres will help him out on the road.

Bush: Looks like a great sleeper candidate. He is an innings eater, he works the strike zone, and he attacks hitters. Bush has crazy control and his K rate is solid. Even though lefties seem to hit him, he has lowered his HR rate.

Who would you rather have in your outfield right now, Brian Giles or Shane Victorino?

I go with Victorino. He has been hot this spring and showed his wheels. I think he has the right field job locked up and could steal 30 bases this season. Giles is 36 and his stats took a major dip last season. I think 2006 was a sign of things to come and he will flop again this year.

I just traded Miguel Cabrera and Delmon Young for Freddy Sanchez and Travis Hafner.’I have Johnny Damon, Jeff Francoeur, Juan Rivera and Carlos Lee at OF so I thought Young was expendable.’I am weak at SS (Stephen Drew) and I will use Freddy there once he begins to play.’This is in a standard H2H league.’How do you feel about the trade?

Also, would you help me choose my last two SPs? Bartolo Colon, Mark Mulder, Zach Duke and Matt Garza are the choices.

Thanks for your time (I know you get tons of emails).

I think Drew is going to be a good one, but probably not this season. Young falls in the same category, for that matter. I would say based on your OF and the guys you brought in, you got fair market value and picked up a guy where you needed. I think the trade worked out.

As for the SPs, I love Garza this season even though he will start the year in Triple-A. The Twins have got to know he is their No. 3 starter this season…right? For the other one, I take Duke. He got hammered in his last outing, but before that he had a 3.38 ERA and will be the Pirates’ Opening Day starter.

By RotoRob
This entry was posted on Monday, April 2nd, 2007 at 3:25 pm and is filed under BASEBALL, Dear RotoRob, RotoRob. You can follow any responses to this entry through the RSS 2.0 feed. You can skip to the end and leave a response. Pinging is currently not allowed.