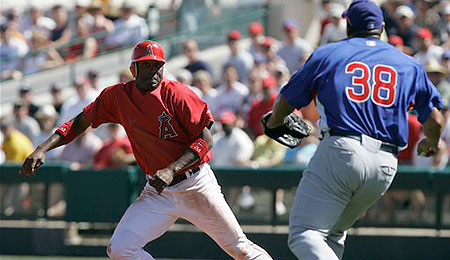 Getting caught in a rundown is the least of the problems facing Gary Matthews, Jr., left. He’s found himself caught in an HGH controversy.

I have a feeling that Arte Moreno is getting tired of Gary Matthews, Jr.

Where do you see this going?

I truly feel that the play of Reggie Willits and Tommy Murphy is going to factor into the final decision.

I always felt that Willits, with his stellar defense and OBP, was the better choice over Matthews.

Most important is that Willits has amazing range and can read balls coming off of the bat…something Chone Figgins couldn’t do. (I can remember on more than one occasion how Figgins would let potential outs drop before him for weak singles.)

Murphy is another story. Powerful arm, great athleticism, and some pop in his bat…makes him an intriguing prospect.

With Garret Anderson occupying LF, it’s only a matter of time before we see Murph in LF and Willits in CF.

As a businessman with a high level of moral standard, I completely understand Moreno’s position…and lack of patience.

He signs the cheques, therefore he is owed the respect of being informed of the entire situation.

And if Matthews is the least bit guilty, or if there is even more bad news on the way…we are treading very close to fraud.

If I was Moreno, he would be gone already. And as Robert Rodriguez, of movie-making fame suggests…ignore union axioms, and deal with the situation as needs dictate.

Where do I see this going? Well, as far as baseball, let it go. The problem with your theory of being done with it is that even if Matthews did come out and say that he took HGH and it is all true, he took it at a time when it was not illegal and banned by MLB. Matthews, according to the rules of the CBA, did nothing wrong and cannot legally be punished by the Angels…even if they want to.

If the Angels try to suspend him or void his contract, Matthews will file a grievance and will most likely win it. He did nothing wrong according to baseball’s rules, so how can it punish him for violating a rule that didn’t exist? It is its own fault (MLB) for ignoring the problem for so many years, and now it is losing fans by the dozens with all this coming to light. Baseball cannot ignore the law then try to use it when it suits them. Either it was illegal or it wasn’t. And, by all previous statements and actions from MLB, it was not illegal at the time therefore no legal action can be taken against a player.

If you listen to all of Matthews’s comments regarding this up to now, he basically is waiting to see exactly how guilty he is in Major League Baseball’s eyes. He seems to want to see just how much MLB really does know about this before he comes completely clean. I am assuming he took something since before last year, his career best was .276/.355/.427 in 344 ABs in 2002 with the Orioles. He has always been someone with the tools and the skills to do it, but could never seem to really put forth the numbers we all thought he was capable of putting up. Then, all of the sudden he plays his first full season at age 31 and has a .313/.371/.495 season.

Someone should have thought about this for around five seconds before they signed him to a five-year, $50 million contract! That takes him to age 37 and making $12 million in the final year of the deal. And baseball wonders why teams lose money.

Now, does this make Matthews a poor ambassador of baseball? Yep, but he wasn’t MLB’s poster child anyway. Does this make his sudden surge in numbers less likely of a breakout? Yep, sure does. It is only spring training, but he is currently sitting at .310 (as of March 16). Does this make his $50-million contract a bad deal? That has yet to be seen.

If Matthews can keep his stats around what he did last season, then he is worth his contract (and least for 2007) and the speculation will die down. If he doesn’t, then the rumors will continue to fly. I don’t know the rules of baseball very well really, but I would bet the Angels have little to no leverage here since the alleged steroid use took place at a time when it was not illegal under baseball’s rules. If they try and void the deal, lawsuits will be filed and I don’t think they will win them since he did nothing wrong under MLB guidelines.

Is steroid use wrong? Yes — ‘roids are exactly what is killing the game and is about to kill the one record that anyone really knows or cares about. Did Matthews do anything wrong? Not in the eyes of Major League Baseball at the time. Punishment cannot be retroactive in this case.

I had asked you when we started our penpal-ness about the top five minor league players.’What are your thoughts on Felix Pie?

Felix Pie…as of March 9 he was headed back to Triple-A. The Cubbies have a logjam at the corners and Jacque Jones in the starting lineup. For a guy who is so highly touted as Pie, hitting .283/.341/.451 in the PCL last year and .219/.261/.267 in the Dominican Winter League this year doesn’t really make me want to snatch him up.

What do I think of him overall? Well, he could be a possible Alfonso Soriano without that much pop. But, it’s equally as possible he’ll be Juan Pierre without the afterburner and with some pop. I would bank on somewhere in the middle, but it should be at least another season or two before he makes it to the bigs to play regularly. A line of .290/.345/.450 with around maybe 15 steals isn’t a stretch for Pie. Jones is blocking him right now and Manager Lou Piniella wants Pie to spend some more time working on hitting Triple-A pitching before he tries tackling major league pitching. If he can mash in the minors to start with, the Cubs may look to see if they can get some value for Jones and give Pie the job this year. Keep an eye on his stats in Iowa for sure.

By James Morris
This entry was posted on Friday, March 23rd, 2007 at 2:20 pm and is filed under BASEBALL, Dear RotoRob, James Morris. You can follow any responses to this entry through the RSS 2.0 feed. You can leave a response, or trackback from your own site.