Position Battles: The Book on the Knicks 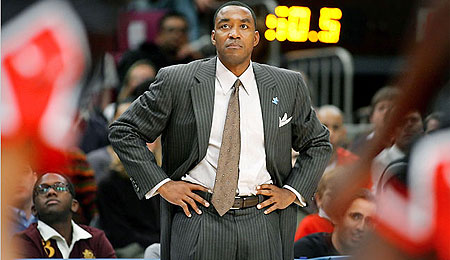 Isiah Thomas has salvaged his job, but can he salvage a playoff spot for the injury-ravaged New York Knicks?

The Knicks have certainly been a lot better than last season’s debacle which found them occupying the Eastern Conference basement. It’s progress enough to save Isiah Thomas’s ass, but probably not sufficent enought to get back to the playoffs, especially with several key players out. In this week’s Position Battles, we check in on the Knicks.

It sounds like Joe Johnson is done for the year; Ben Gordon is seeing a ton of action; and P.J. Brown isn’t ready to be set adrift on an ice floe just yet.

Sorry, we don’t have any topless photos of Snakes on a Plane hottie Elsa Pataky, but we can fill you in on the latest fantasy basketball happenings in Position Battles.

By RotoRob
This entry was posted on Wednesday, March 21st, 2007 at 4:21 pm and is filed under BASKETBALL, Position Battles, RotoRob. You can follow any responses to this entry through the RSS 2.0 feed. You can leave a response, or trackback from your own site.