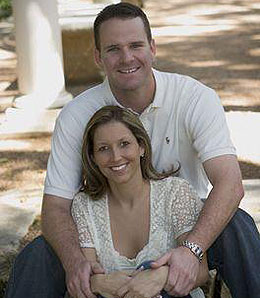 Former first rounder Beau Hale is still fighting to make it to the majors, but the fact that this image of he and his wife Samantha is the best available pic of him speaks volumes.

I was doing one of my thousands of daily Google searches and I stumbled upon a blast from the past: Beau Hale.

Taken 14th overall in the 2000 draft, Hale is symptomatic of an era when the Orioles struggled badly to draft and develop homegrown talent.

He enjoyed a decent pro debut, but even in his first season, the arm troubles began. Hale was middling at best in 2002, and then came arm issues serious enough for him to miss two full years.

Hale returned in 2005, pitching mostly out of the bullpen at High-A, but he was clearly not back to full strength. Last season, however, he enjoyed some very nice success and made it back to Double-A for the first time since 2002, earning Baltimore’s Minor League Comeback Player of the Year honours for his efforts.

Now 28, it’s hard to imagine Hale ever becoming more than a middle reliever, and it was rather disappointing to discover that he’s not in the O’s big league camp. But given that the O’s signed a large number of minor league pitchers this offseason, it’s reasonable to assume he was lost in the shuffle and wound up in minor league camp instead.

The former Longhorn carried on his success from 2006 into the fall when he married his college sweetheart.

Given how far Hale has had to come to battle back and his one-time stud prospect status, there are a lot of O’s followers who would love to see him one day get a chance at Camden Yards. If he can duplicate his success from last season, he should at least earn his first taste of Triple-A action if nothing else.

By RotoRob
Tags: Baltimore Orioles, Beau Hale, Camden Yards, Google, Samantha Hale, Texas Longhorns
This entry was posted on Tuesday, March 20th, 2007 at 6:31 pm and is filed under BASEBALL, Player profile, RotoRob. You can follow any responses to this entry through the RSS 2.0 feed. Both comments and pings are currently closed.