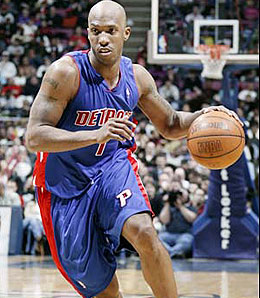 The play looked innocent enough. Just a step to the right and a quick toss. But the next thing you knew, Chauncey Billups was limping off the court, clutching his left groin in agony. It’s an injury that puts a damper on a fantastic Western swing by the Pistons and could knock Mr. Big Shot out of action for Sunday, perhaps longer. We take a look at the fantasy ramifications in today’s Daily Dose.

Rafer Alston burned his ex-team; Andre Miller rediscovered his shooting touch; and Caron Butler’s knee injury will knock him out for at least six games.

By RotoRob
Tags: Chauncey Billups
This entry was posted on Saturday, March 17th, 2007 at 2:06 pm and is filed under BASKETBALL, NBA Daily Dose, RotoRob. You can follow any responses to this entry through the RSS 2.0 feed. Both comments and pings are currently closed.