Dear RotoRob: Another Name for the Rangers’ File 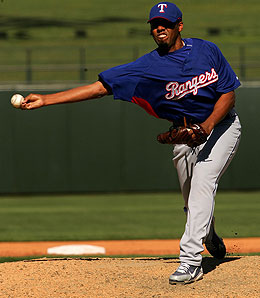 If Eric Gagne goes down, could Wes Littleton be a candidate for saves in Texas?

Great write up on the Rangers. But you forgot one very intriguing player that could replace Eric Gagne in 2008 (or 2007 if Gagne falls apart sooner).

Well, his incarnate — Wes Littleton — deserves some mention. Just take a look at his ERA and WHIP from last year.

Very few could touch his stuff. It could have been the knuckle-scraping delivery, or the movement.

Either way, the book is now out on him, so let’s see how he fairs during his second sweep of the AL.

So far, his first outing was dismal. But let’s keep a watch.

Glad you enjoyed the article.

Thanks for the tip. I’m going to keep my eyes on Littleton. Hey, if he can be anywhere near as good as Quisenberry, that works for me.

Dear RotoRob.com,
‘
Thanks to your advice, I am in first place of my NBA league, eight points ahead of second place.
‘
But the challenge of MLB is right in front of me. I need HRs (to be ready for the opening day) and I’ve been offered Derrek Lee and Alex R’os for my David Ortiz. What do you think?

Sorry if it’s too much ahead of time, but I’ll try to win this one too.

As for your deal, I say no, and here is why.

Lee was hurt for much of last season, but he didn’t show me a lot of pop even after he did return. Lee has 86 HRs over the last three years and could start off slow this season after an injury-riddled 2006.

Basically, Ortiz gives you the production of two people here. Crawford gets you the same 15-20 HRs that Rios does. Willy T. is your speed demon, so he gets a power pass. Ordonez will just about mirror last year’s stats I bet, and I am not a Podsednik fan at all. But, adding a Rios type that could very well have a sophomore slump and a 1B to back up Konerko isn’t worth losing Big Papi. Keep the sure thing in Ortiz and let someone take the gamble on Rios and Lee.

I have a fantasy baseball question about Travis Hafner.’My league allows players to play a position if they are “on pace to play 20 games” at that position.’So through 30 games, if a player played 1B four times, he’s eligible.’I have heard the buzz that Hafner will play 1B once a week.’If that is so, he will consistently meet our league’s eligibility requirement.’My question is:’Do you think he’ll really live up to this statement?’If I draft him for 1B and he only sees time as the DH, or plays less than once a week at 1B, then it really limits my flexibility.’Is he worth it?’

Rotowold.com reported that he said he will try and play first base once a week, and I have to think he will. I look at Hafner as an early Edgar Martinez. A liability in the field, but a guy that you want to keep on his toes so he doesn’t get bored DHing.

Is Hafner worth it? Is .300/.415/.585 worth it? That’s what I see him hitting and I have to take that chance. Now, Haffy has had three and a half seasons in the majors and has started a total of 58 games at first base. So, do I think he will actually start once a week? No, I don’t think so. He has fists of steel. Maybe he could, but history tends to repeat itself. Fifty-eight starts in 497 games played over 3.5 years…don’t count on it. But, you’ve still got one of the best young hitters in the game and if he wants to start once a week at first, maybe they let him. Take the chance…the kid is a masher with the stick either way.

Could you help with my five keepers please?

I am in a league in which you can retain a player for three years. This year the majority of the stars went back in the pot. Which five would you keep out of this bunch?

Young is going to be a very special hitter and that’s a well-known fact. The question for me is if he can let his natural abilities do his talking instead of his mouth. His BA is there now and the power will follow in the very near future. Keep him for sure!

Baldelli is almost two years removed from Tommy John surgery, so I look for a breakout season from him. He is impatient at the plate, but as gifted a hitter as he is, that should be enough to make up for it.

Roberts is healthy and will scare many off with his previous numbers. He picked up his power stroke in the second half last season (one HR before the All-Star break, and nine after), so hopefully that is a sign of things to come in 2007. His speed remains in the 30-SB range as always.

Zambrano can be erratic and wild at times (led the majors in walks), but when the kid is on, he is on! If the Cubbies can put up a more consistent offensive attack this season, Big Z could win 20 games for them.

Putz has a good high angle to throw from and has good command of three pitches (mid-90s fastball, a hard slider and a good splitter), which leads to a ton of strikeouts for a closer. The only thing that can stop J.J. from becoming a household name in the fantasy world is an unforeseen injury.

The reason I keep who I do is because Young is special, Roberts is a top three 2B, Baldelli is a good sleeper in the OF, Zambrano is just a stud ace, and Putz could be the cheap closer you always look for. Keep them and you won’t be sorry.

I have to give the edge here to Jackson and Hill. Berkman is nice, but I am not that much of an Uggla fan. My friend pitches for the Oakland A’s Double-A/Triple-A team(s) and has faced Uggla. He was not that impressed by his swing. Plus, Jackson is an underrated 1B right now and Hill could have a ton of upside if he can stick in Chicago’s rotation all season long.

Why not just take Berkman and Hill?

By James Morris
This entry was posted on Thursday, March 15th, 2007 at 2:32 pm and is filed under BASEBALL, Dear RotoRob, James Morris. You can follow any responses to this entry through the RSS 2.0 feed. You can skip to the end and leave a response. Pinging is currently not allowed.