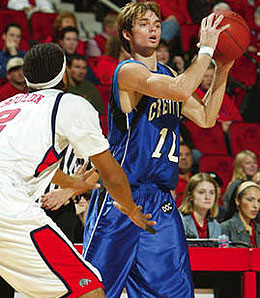 SKINNY: As usual, you never know what’s going to happen in the Missouri Valley Conference, and with their win over 11th-ranked Southern Illinois in the final, the Creighton Bluejays earned another trip to the dance and continued an MVC trend whereby no team has won the regular season title and conference tourney in the same year since 1998. Creighton rode a 13-5 conference mark to a 22-10 overall record, led by its trio of seniors. It likely would have been in the mix for an at-large bid either way, but the MVC win eliminated any nail biting Creighton would have had to do this evening when the at-large bids are unveiled. I’m expecting the Bluejays to garner a 10 or 11 seed, perhaps a bit lower, which is going to make getting to the second round a difficult task.

HISTORY: Creighton is making its first trip to the tourney since 2005, but it’s the seventh time in nine years and 15th overall that the Bluejays have made the cut. They have an overall record of 9-16, but their last win was five years ago.

STRENGTHS: FT shooting. They’ve knocked down the second-most free throws in the MVC and, at 75.5 per cent, the Bluejays pace the conference and come in as the 11th-best FT shooting team in the nation. This is one team you do not want to put on the line. It’s a balanced team with strong both a frontcourt and backcourt.

WEAKNESSES: Creighton doesn’t have one overwhelming weakness, but a 44.6 per cent mark from the floor was only the ninth-best in the conference.

KEY PERSONNEL: Senior guard Nate Funk, back this season after redshirting in 2005-06 when shoulder surgery limited him to six games, enjoyed a phenomenal year with a career-high 17.6 PPG (best in the MVC), plus 3.5 RPG and 3.0 APG. The tourney MVP was huge in the semis with a season-high 33 points, and then followed that up with a 19-point, four-assist showing in the finals. The pre-season MVC Player of the Year is a strong outside shooter and a fantastic FT shooter. Centre Anthony Tolliver, also part of Creighton’s senior class, ranked fifth in the conference with 6.7 RPG while adding 13.4 PPG and 2.0 APG. Tolliver came up huge when it counted, pouring in 15 points with 13 boards in the conference finals for his first double-double in 10 games and sixth overall on the season. While his shooting percentage slipped slightly this year, Tolliver definitely enjoyed his finest season, earning first team All-Conference honours in addition to be named a second team Academic All-American.

INTANGIBLES: Getting to the dance hasn’t been a problem with six MVC titles in nine years, but with none of them coming as the top seed, Creighton has experience in pulling off the upset. In fact, the win over Southern Illinois came after the Bluejays had dropped eight straight to the Salukis. Unfortunately, that Cinderella quality hasn’t extended to the NCAA tourney. But with a fairly deep team that has a heavy senior influence (besides Funk and Tolliver, Nick Porter plays a big role and all three made the MVC all-tourney team), perhaps the Bluejays are mature enough to pull off a shocker or two. The fact that their three seniors have all had to overcome injuries probably only makes them hungrier, so maybe this is the year that Creighton can finally travel deeper into the tourney.

By RotoRob
This entry was posted on Sunday, March 11th, 2007 at 5:30 pm and is filed under BASKETBALL, March Madness Preview, RotoRob. You can follow any responses to this entry through the RSS 2.0 feed. You can skip to the end and leave a response. Pinging is currently not allowed.