OBP as a Measure of Offensive Performance 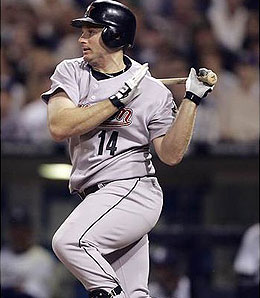 Bill offers his take on the appropriate use of on-base percentage in measuring performance. Comments are welcome.‘

About 20 years ago, I recall asking a group of knowledgeable baseball friends what they thought the best single statistic was for measuring offensive performance. The consensus was that it was slugging percentage. If I posed the same question today to respected baseball analysts, I’m certain that the answer would be on-base percentage and they could cite studies to support their position.

The importance of on-base percentage in scoring runs is obvious. However, is it always the best way to evaluate a player’s performance? Consider the curious case of Morgan Ensberg. In 2005, Ensberg had a breakout year, batting .283 with 36 home runs, 101 RBI and an on-base percentage of .388. He was voted the Most Valuable Player on Houston’s National League Championship team and finished fourth in the voting for the National League MVP.

In 2006, he started out on an even stronger pace with nine home runs and 19 RBI in April. Among National League batters, only Albert Pujols had a better month. Ensberg finished the 2006 season with an on-base percentage of .396, an improvement over his strong showing in 2005. So he must have had a better year in 2006 than in 2005, right?

Not so fast. Let’s take a look at the other numbers.

In 2006, Ensberg batted .235 with 23 home runs and only 58 RBI. He began the season batting fourth in the lineup behind Lance Berkman and in front of Preston Wilson and Jason Lane. His primary job was to drive in runs, and with Berkman having an outstanding season, he had plenty of opportunities.

Ensberg’s performance tailed off sharply in May when he batted only .216 and was even worse in June. He was batting .174 for the month when he injured his right shoulder on June 9. Ensberg missed a week before returning to the lineup, but was obviously hampered by the shoulder injury and finally went on the disabled list on July 10.

Ensberg’s poor performance and injury prompted the Astros to trade away two prospects to Tampa Bay for third baseman Aubrey Huff. It also provided an opportunity for Mike Lamb to play third base. When Ensberg returned from the disabled list on August 1, he did not play well enough to regain his starting position and he played intermittently for the remainder of the season. In August and September, Ensberg had an on-base percentage well over .400, but had only four home runs and 14 RBI in 171 plate appearances, an unacceptable rate for a batter in the middle of the order.

Ensberg seemed reluctant to swing the bat when he came back, which may have been due to continued shoulder soreness. He did not hit with power and appeared to be working for walks which also resulted in a lot of strikeouts. Simply put, Ensberg did not provide the type of offensive production that the offensively-challenged Astros needed in the middle of the batting order.

With Ensberg’s failure as a run producer, the Astros needed to beef up the offense and may have overspent and mortgaged the future in signing free agent Carlos Lee to a six-year, $100-million contract. Another reason for the need for more run production was the failure of Lane to produce in 2006. Lane led all NL right fielders in home runs in 2005 with 26 while batting .267. However, in 2006, he hit just 15 home runs while batting only .201. Lane, like Ensberg, had a higher on-base percentage in 2006 than he did in 2005.

What can be learned from this development is that on-base percentage, while important, especially for hitters at the top of the batting order, can be much less important for hitters in the middle of the order who are expected to be run producers.

Bill Gilbert writes on a variety of baseball-related topics and is a frequent contributor to RotoRob.com.

By RotoRob
Tags: Houston Astros
This entry was posted on Saturday, March 10th, 2007 at 8:51 pm and is filed under BASEBALL, RotoRob, Sabermetrics. You can follow any responses to this entry through the RSS 2.0 feed. Both comments and pings are currently closed.