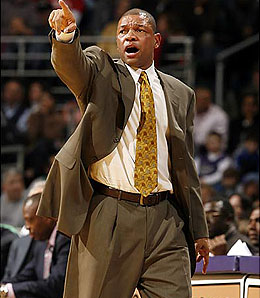 Despite Al Jefferson’s offensive contributions of late, Coach Rivers was more interested in pointing out his defensive work.

When Boston plucked Al Jefferson out of high school, I was tremendously stoked based on the scouting reports I’d read. However, despite flashes of greatness, Jefferson’s first two seasons were generally a disappointment thanks to injuries and the usual inconsistency you see from such a young player, particularly a big man. Well, Big Al has definitely come into his own this season, and his recent play puts him on par with almost anyone in the game. We discuss Jefferson’s big Friday night and the Celtics’ recent run in today’s Daily Dose.

Will new daddy Carmelo Anthony come back a better player? Not so far; Chris Kaman is losing his PT faster than his hair; Mark Madsen is back, yet still not playing; Raja Bell had a scare, but seems okay; and Caron Butler’s knee shouldn’t be a factor going forward.

I still prefer the RotoWidow’s idea of arranging french fries in bracket formation, but apparently some prefer to use them to paint. At any rate, once you run out of ketchup, it’s time to review all the fantasy basketball news you can handle, and we’re here to help with the Daily Dose.

By RotoRob
This entry was posted on Saturday, March 10th, 2007 at 5:25 pm and is filed under BASKETBALL, NBA Daily Dose, RotoRob. You can follow any responses to this entry through the RSS 2.0 feed. You can leave a response, or trackback from your own site.