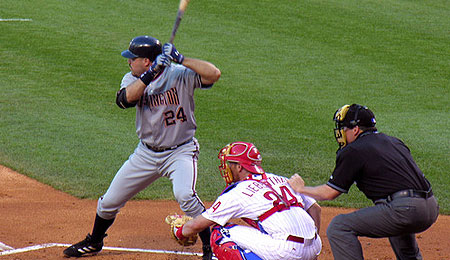 Some Nat fans believe the injury to Nick Johnson will hurt more than the defection of Alfonso Soriano.

Thanks for getting back to me (Tom e-mailed me regarding my Nationals’ preview, a matter discussed in the last Dear RotoRob column).’You’d think ESPN’would be a’little smarter than that.’I recall, though that for a year or more they had RFK’s total attendance capacity at around 55,000, which is true for when the Redskins played there, but for baseball it’s only around 45,000. Very annoying it took them so long to fix it.
‘
Here’s an article describing opening day, 2005.’
‘
As a season ticket holder for both years, I have a pretty good handle on when they showed up, and when they weren’t here (34 years, to be exact).’I was even in attendance for the Senators’ last game in 1971, so I had plenty of years to prepare.

As for 2007, we know there’s a lot of work to do.’The loss of Alfonso Soriano is no big deal, as he never hit with runners in scoring position, and we have competent replacements.’But the loss of Nick Johnson is going to be a huge blow to the offense.’I think the starting pitching will be better than everyone expects.’John Patterson, when healthy, is an ace (Baseball Prospectus ranked his 2005 season 13th among all major league pitchers, by VORP).’The Nats have another dozen guys competing for the four openings.’These are not mediocrities in the mold of Pedro Astacio and Ramon Ortiz, but rather guys who once were highly regarded, who hit bumps in the road along the way (Tim Redding, Shawn Hill, Jerome Williams).’I can’t tell you who will emerge, but I think when you have a dozen guys with upside, you’re going to get some surprises to the upside.

Still I’d be happy to win 75 games this season, and pick off one of the other NL East teams.
‘
Best,
‘
Tom

Yes, you’d think so. It’s making me rethink my choice of using ESPN for most of my research.

Thanks for the link to the article and your assessment of the situation.

Dear RotoRob.com,
‘
Chris Carpenter, Roy Halladay or Brandon Webb? Which one is the best?’

Which one is the best this season or over their career? Let’s just look at this season. The simple answer is Carpenter. Here is why: Carpenter has amazing stuff for a starting pitcher. A 95 mph heater, good curve ball, good slider, and add to that a solid change-up, and you have the makings of an anchor for your staff. And, when you look at his career total for innings pitched, he has a good amount fewer than most other 31-year-olds. You know what you are going to get with Carpenter each year now.

Halladay is going to do what he is going to do. He has an above average selection of pitches to choose from, off the chart command of those pitches, and the ability to go deep into the innings. Where does Halladay drop below Carpenter then? The forearm injury that sidelined Halladay twice in the 2006 season makes him more of an injury concern right now.

Webb is the best ground ball pitcher in the bigs right now. But, the problem is, if he doesn’t have Orlando Hudson there to save him, his numbers take a dive. Webb was a little wild in his early days as his WHIP shows, but he has been able to really gain command of his pitches now and is only a small notch below Halladay on the SP radar.

As a bonus for our readers, here’s how we currently see the top 10 SPs:

1. National League: who are two set-up men that can grab saves and wins?
2. Will Duaner Sanchez or Aaron Heilman be the set-up man for my beloved Mets?
3. Any thoughts on Tom Gorzelanny?
4. A month of non-stop golfing vs. one guitar lesson from Bruce Springsteen?

1. Well, if you mean two guys who technically occupy a MR role, but are either dark horses for saves, will get the nod when the current closer fails, or who will get the job due to injury, I have to throw these names out: Jonathan Broxton and Dan Wheeler.

Wheeler: basically, Brad Lidge is a meltdown waiting to happen. Lidge isn’t striking people out anymore and the Astros are just looking for a reason to yank him. Look for Wheeler and Chad Qualls to be smart handcuff candidates for Lidge.

2. Guillermo Mota has to serve a 50-game suspension, so that leaves the closer’s role to Billy Wagner with Sanchez No. 2 and Ambiorix Burgos No. 3 in line. Heilman won’t even get a shot at a rotation spot, so his chances of being a top set-up guy are about nil.

3. Gorzelanny…injury concern with the bad elbow. But, he showed up early in Pittsburgh and says his elbow is fine. I think Gorzelanny is a good bet for a sleeper pick this year. I’d look for him to finish with around 150 innings, 10 wins, and a 3.50 ERA. The big question is if he has learned to tell the truth about his elbow problems. He missed almost a month at the end of last season because of it.

4. I’ve got to run with the golfing. I can do neither, but when I do go to the driving range, I get kicked off because I keep lobbing golf balls over the netting with my nine iron and trying to hit the runners passing by (there is a jogging trail right next to the driving range). I am so unable to play musical instruments that it is not funny. Ever seen American Pie 2 where Jim tries to play the trombone? That is so me. [Editor’s note: James is bang on about most things, but turning down face time with the Boss? Hey, I like golf, but let’s get real. It’s the Boss!]

You want to know who to look at as a sleeper pick for saves? Akinori Otsuka and Seth McClung. You can’t trust Eric Gagne until you can trust Gagne. [Editor’s note: Check out the next episode of Dear RotoRob for another sleeper pick in the Texas bullpen.] McClung’s 1.83 WHIP will scare a lot of fantasy owners, and it should. But, if he can harness his control over that wicked heater he has, he could be a late-round gem.

In a league with only seven teams, every team is going to be an all-star team. Traditionally the weaker positions like C, SS and 2B get ignored, while spots like the corner OF, 1B, 3B and SP go first. It kind of depends on what your idea of the better team is. I like taking pitching first and then get the hitting. Picking in the top seven (only seven teams, so you have to), I take a SP No 1. Then, I grab the best available hitter regardless of position. Grab another pitcher third, hitter fourth, pitcher fifth, hitter sixth, etc. I look at the trends… after the first closer is taken, I grab the best available closer out there. Don’t miss the boat on a top saves guy, but don’t reach too early for one either. You don’t want to be stuck taking Brad Lidge and having to burn a pick on Dan Wheeler as his handcuff.

Take power first for hitting. Then look at OPS (even if you don’t use OPS as an official category, it is the best all around indicator). Look at Dave Roberts for the OF… he will get you a .285-ish BA, a good OBP, and add some steals for you in the later rounds. Don’t worry as much about middle relievers…low-ERA middle relievers are a dime a dozen. Take a C early… there are only about five catchers worth having. I take the best available hitter in round two, then at four, I take the best C there…unless a run starts and I grab one while I can.

My strategy is simple. Build around pitching and look at a guy’s OPS for hitting. Avoid the Adam Dunns of the world like the plague. His 30 HRs don’t make up for his .225 BA. Grab the weaker positions before they do: C, SS, 2B and 3B before OF and 1B. Keep your eye on the pitchers, but don’t neglect the hitters. Alternate picks between hitting and pitching. Once you’ve got your starting five pitchers and two closers, take a few more hitters than pitchers. And, don’t worry about sleepers in a league that small. There are bound to be FAs on the board that have a very nice season.

By RotoRob
Tags: Washington Nationals
This entry was posted on Tuesday, March 6th, 2007 at 9:41 am and is filed under BASEBALL, Dear RotoRob, RotoRob. You can follow any responses to this entry through the RSS 2.0 feed. Both comments and pings are currently closed.