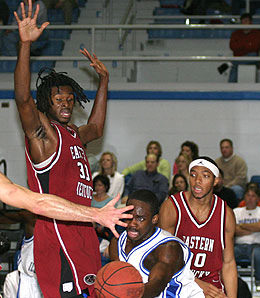 SKINNY: It took a layup with just 2.9 seconds left to pull it off, but the Colonels were finally able to beat Ohio Valley top seed Austin Peay when it counted, pulling off the upset in the title game. Eastern Kentucky had lost to Austin Peay twice this season, but now, as Ohio Valley Champs for the fifth time, they are going to the Tourney for the second time in three years.

HISTORY: The Colonels hope this tourney appearance really will be lucky trip number seven as the school seeks its first ever NCAA tournament victory.

STRENGTHS: Outside shooting, shooting accuracy. Eastern Kentucky paced the Ohio Valley Conference in 3-pointers made, sinking the 25th most in the nation. The school also ranked at the top of the OVC in FG percentage, sinking better than 46 per cent of its shots.

WEAKNESSES: Getting to the line. The Colonels aren’t a horrible FT shooting team, but they simply don’t get to the line enough, relying more on a perimeter attack. EK ranked dead last in the conference in both FTs made and attempts.

KEY PERSONNEL: Senior Julian Mascoll has gotten better every season, culminating in a huge 2006-07 in which he finished second in the conference in APG (4.9) and third in field goal percentage (55.1), a rare combo. Although he had some turnover issues this year, the athletic Mascoll really improved his FT shooting, a weakness throughout his career. Junior F/C Darnell Dialls was not able to duplicate last season’s breakout FG percentage of 57.5, but he still finished among the conference leaders in shooting, remained a top post presence and continues to be one of the team’s go-to players in key situations.

INTANGIBLES: Coach Jeff Neubauer, who guided the club to a 21-11 mark, makes his tourney debut as a head coach, but he is not without NCAA experience, going to the regional finals as an assistant coach with West Virginia in 2005. This is a disciplined team that won’t hurt itself, ranking No. 2 in the country in fewest fouls per game.

By RotoRob
Tags: March Madness
This entry was posted on Monday, March 5th, 2007 at 2:22 am and is filed under BASKETBALL, March Madness Preview, RotoRob. You can follow any responses to this entry through the RSS 2.0 feed. Both comments and pings are currently closed.