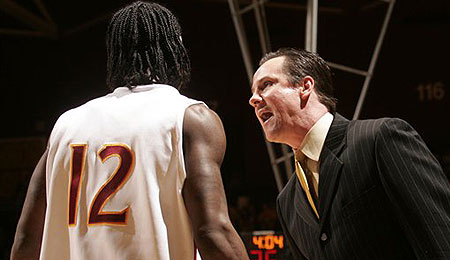 Can the Eagles finally soar in the tourney under Coach Marshall? Mark them down as a sleeper pick.

SKINNY: While the Eagles barely avoided an upset in the Big South final, edging out VMI 84-81, they became the first team in Big South history to go undefeated in conference play and lost just four games all season, so they could garner as high as a No. 5 seed (although more likely, they will be closer to a 10 seed). As the Big South champion, Winthrop gets the automatic bid, but with an 18-game winning streak that has the school knocking on the door of the Top 25, the Eagles probably would have gotten an at-large bid even if they had blown the conference title game.

HISTORY: This is the seventh trip to the dance in the last nine years, but Withrop is still seeking its first ever tournament victory.

STRENGTHS: Outside game, offensive efficiency, protecting the pumpkin. Winthrop is the top 3-point shooting team in the Big South, averaging better than 36 per cent from beyond the arc, while its 48.1 per cent FG percentage is tied for first. The Eagles give up just 13 turnovers per game, also best in the conference.

WEAKNESSES: FT shooting. The Eagles were dead last in the Big South at the charity stripe. The team’s bench players are particular weak from the line, at that could become a major factor if Winthrop’s starters get in foul trouble.

KEY PERSONNEL: Junior point guard Chris Gaynor runs the offense, and although he struggled with his shot this season, he enjoyed his finest year despite a slight reduction in minutes. Gaynor averaged 7.6 points and finished third in the conference with almost five assists per game, dropping a career-best 10 dimes in the Big South Final. Sixth man Taj McCullough has shown a nice touch off the bench, ranking fourth in conference with a mark of 56.4 per cent from the field. The junior forward, who would probably be a starter on a weaker team, played a much bigger part on the Eagles this year, averaging 8 PPG, and he even showed a decent touch from outside.

INTANGIBLES: Coach Gregg Marshall must be happy that he changed his mind about accepting a coaching gig at the College of Charleston last summer. He’ll be even happier if the team can finally get over the hump after last season just missing out on a big-time upset when they lost to No. 2 seed Tennessee by only two points. Note that all four of the Eagles losses came against teams that ranked in the top 14 in RPI, so this team is capable of beating almost anyone. The school has been knocking on the door for a while, so if Winthrop can get a seed as high as six or seven, it has a chance to not only finally win a tourney game, but perhaps make some noise. Looking for a sleeper when you’re filling out your brackets? Try Winthrop, especially if it gets slotted in a favourable region.

By RotoRob
Tags: 2007 March Madness
This entry was posted on Sunday, March 4th, 2007 at 5:20 pm and is filed under BASKETBALL, March Madness Preview, RotoRob. You can follow any responses to this entry through the RSS 2.0 feed. Both comments and pings are currently closed.