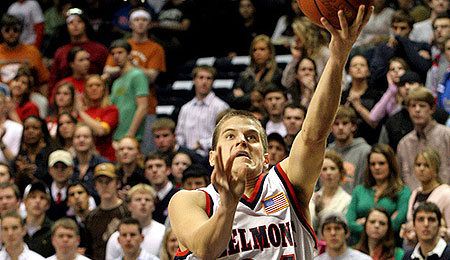 Guard Justin Hare hopes to help the Bruins past the first round of the tourney this year.

Conference tournaments got underway last week and we’re starting to get our first automatic bids for the NCAA Men’s Basketball Tourney. So today, we start our series of team previews to help you identify what to look for and who to watch come March Madness time.

SKINNY: For the second straight season, Belmont heads to the tourney with an automatic bid after taking the Atlantic Sun Tourney. The Bears hammered East Tennessee St. 94-67 in somewhat of an upset in the conference championship game. Coach Rick Byrd, in his 21st season at the school, hopes the team can improve upon last season’s one and out at the hands of powerful UCLA.

HISTORY: Last season’s appearance in NCAA Tourney was the first in school history.

STRENGTHS: Outside shooting. The Bears proved why they were the top 3-point shooting team in the Atlantic Sun and how they finished 10th in the nation in 3-pointers made when they nailed 12 treys in the first half alone to seal the conference title game. As good as they are at sinking shots from outside, the Bruins are even better at preventing them, ranking No. 1 in the country in opponents’ 3-point FG percentage. The Bruins also have good depth, with a bench that features at least two key contributors.

WEAKNESSES: Getting to the line. Belmont ranked only eighth in the conference in both FTs made and attempts. Fortunately, their outside shooting doesn’t tend to break down, but if their shots aren’t sinking, this team is in trouble as it is not skilled at drawing cheap points at the charity stripe.

KEY PERSONNEL: Belmont gets solid production from its bench as junior guard Justin Hare led the team in scoring with 14.4 PPG and won tourney MVP honours the past two seasons. He’s the team’s top player and is a pretty smart cookie too, as an Academic All-American. Senior centre Boomer Herndon has dealt with health issues, but he is the club’s top rebounder, supplies some solid shot blocking and has a great touch off the bench. The Tennessee transfer played six minutes less per game this season, but his 62.9 field goal percentage led the Atlantic Sun conference.

INTANGIBLES: For a college known for its music school (supported by the likes of country star Vince Gill), Belmont hopes to make some beautiful music come tourney time. The experience of making it last year will really help and if the Bruins can get a seed higher than last year’s 15, they could be dangerous, especially if they put on one of their patented outside shooting displays.

By RotoRob
This entry was posted on Sunday, March 4th, 2007 at 12:58 pm and is filed under BASKETBALL, March Madness Preview, RotoRob. You can follow any responses to this entry through the RSS 2.0 feed. You can leave a response, or trackback from your own site.