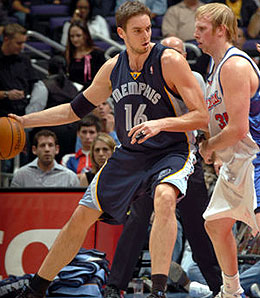 What does Pau Gasol have to do to impress Tony Barone? Apparently, filling the stat sheet isn’t good enough. I’m not suggesting Tony is getting ready to fit Pau with a pair of cement shoes, but he’s clearly not overjoyed with his star’s late-game performances. We check in on the situation in today’s Daily Dose.

Emeka Okafor could be out for a while; Jerry Stackhouse was off getting a rub ‘n tug…err…massage; Stephen Jackson’s toe is killing my team; Lamar Odom is over the knee problem, but what about his shoulder?; Charlie V. stuck it to his old mates; the Knicks backcourt is being held together by spit and tape; the Matrix’s hand remains an issue; Carlos Boozer had a rare off night; and Coach Rivers and Paul Pierce can’t agree on when he’ll be right.

In today’s Daily Dose, you’ll find enough fantasy basketball nuggets that you won’t even mind missing the next episode of that crazy soccer mom show.

By RotoRob
Tags: Memphis Grizzlies
This entry was posted on Saturday, March 3rd, 2007 at 5:15 pm and is filed under BASKETBALL, NBA Daily Dose, RotoRob. You can follow any responses to this entry through the RSS 2.0 feed. Both comments and pings are currently closed.