Dear RotoRob: Up Chuck and Over the Hill 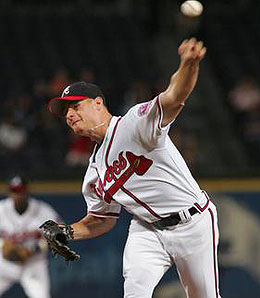 Atlanta lefty Chuck James looks like an excellent bet in 2007.

I am high on two young pitchers, Chuck James and Shawn Hill. I think they can put up very good numbers (and Ks), plus, unlike many sleepers, they are pretty much guaranteed jobs. What do you think of these two?

While I would rather get high on something besides pitchers, I much prefer James over Hill. James definitely has serious sleeper potential and could be a steal, whereas I don’t agree that Hill has a job sewn up. As a I wrote in my season preview of the Nationals, it’s all up in the air as far as their rotation goes. I mean, I’ve got to give him props as a Canadian boy, but I am concerned with the Nationals and their inability to keep pitchers healthy. Hill could be a great bet this year, but James will be.

Love your website and the columns your write for Rotoworld.’Keep up the good work.
‘
Just wondering your thoughts on Ian Kinsler.’Do you think he will make the jump into the category of elite 2B this season?’Seems he has the skills and plays in the ballpark to do it.’Are the Rangers 100 per cent committed to him?

Thanks for your time.

Thanks so much for the support, man! Much appreciated.

I am huge on Kinsler and have been since I drafted him in my keeper league two years ago. And even though I was hoping he’d stick at shortstop, I am still very bullish on his prospects as a second baseman.

His rookie season was very impressive. Nice BA, double digits in both homers and steals despite missing time with injuries and being slowed by a thumb issue early in the year. I’d expect him to move into the tier just below Robinson Cano and Brian Roberts among AL second baseman this season.

I don’t see anyone who can currently touch Kinsler in Texas. I believe they are looking at Joaquin Arias as a potential CF now, removing the possibility that he’ll take over short and Texas would shift Michael Young back to second. And yes, Kinsler is very much helped by Ameriquest, but I still see him being capable of topping out as a 25 HR, 15 to 20 SB, .300 hitter, maybe not in 2007, but by the end of the decade when he’s in his power prime years certainly.

Dear RotoRob,
‘
Although my fantasy baseball draft isn’t until late March, I decided to check out the position eligibility of players knowing that it varies from from league to league. I was pleasantly surprised to find out that Troy Glaus qualifies at SS/3B. I also noted that Chone Figgins qualifies at 2B as well as 3B/OF. I participate in a 12-team auction-style’5×5 Roto league. How should I re-adjust the dollar values of Glaus and Figgins’knowing that they qualify at SS and 2B respectively? I believe I can gain a significant’draft’advantage because’many of the owners in my league are slaves to draft mags/websites that do not have Glaus and Figgins qualifying at those scarce positions.
‘
Thanks.
‘
Liam

Hi Liam,
‘
Oh man’.you’re lucky to have Glaus available at short and Figgins at second! If I could have used Figgins at second last year. I probably would have won the title if that was the case, but my league doesn’t follow the previous season qualifications. But enough moaning.
‘
Number crunching isn’t my specialty, but I would suggest bumping Glaus up to around $25, putting him a smidgeon below the top tier AL shortstops (Derek Jeter, Miguel Tejada and Michael Young). As for Figgins, if he qualifies at second in your league, he has to move to the head of the class in the AL, even if he won’t score as many runs as the No. 9 hitter. I’d also put him at about $25, good enough to be selected over Robinson Cano or Brian Roberts certainly.
‘
Hope that helps.

How about Jorge Cantu? I forgot him and he will be available.’

Cantu was a lost cause last year but should bounce back nicely this season. He could enter the season undervalued to an extent, so makes for a nice sleeper candidate. I like his power potential, but don’t expect him to hit for a very high average, although it will obviously be up from last season’s .249 mark.

By RotoRob
This entry was posted on Monday, February 26th, 2007 at 1:55 am and is filed under BASEBALL, Dear RotoRob, RotoRob. You can follow any responses to this entry through the RSS 2.0 feed. You can leave a response, or trackback from your own site.