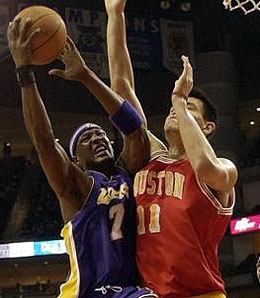 If the Lakers land Jason Kidd, don’t expect Lamar Odom, left, to be part of the package.

Are you ready for the “second half” of the NBA season? We get underway tonight and all the biggest news seems to be in the backcourt with Steve Nash, Allen Iverson, Jason Kidd and Michael Redd all expected back in action Tuesday. We explore all four in today’s Daily Dose.

LeBron James is reaching out to today’s youth (because, of course, he’s such an old-timer himself); Chris Kaman hopes to keep his hot play going; Rashad McCants is looking like a second-half sleeper; Kurt Thomas is back tonight and he gets to start right away with Boris Diaw still out; Deron Williams hurt his groin in Friday’s Rookie-Soph challenge, but no one knew about this until now; and Andres Nocioni is still doubtful (and his days as a Bull could be numbered).

In today’s Daily Dose, we’ve got enough fantasy basketball news to keep you from pulling a Britney Spears , i.e., going berserk, shaving off all your hair, and checking yourself into rehab.

By RotoRob
This entry was posted on Tuesday, February 20th, 2007 at 4:49 pm and is filed under BASKETBALL, NBA Daily Dose, RotoRob. You can follow any responses to this entry through the RSS 2.0 feed. You can leave a response, or trackback from your own site.