Dear RotoRob: On the Mark with Mets 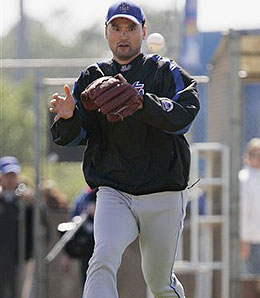 The Mets added Chan Ho Park so Jorge Sosa could take over the long reliever gig from the injured Dave Williams.

Just wanted to drop you a line to say that I read your Mets preview on Rotoworld, and it was excellent. As a former Rotoworld writer and possibly the biggest Mets fan on the planet (okay, that’s an exaggeration), I have to say that I could not have written it any better…in fact, I don’t think I would have written the column nearly as well as you did. Your analysis was on target from the first word to the last. The only thing I would have added is that Dave Williams’ injury left the Mets without a long-relief option, which is why they signed Chan Ho Park (so that they could move Jorge Sosa to long relief). Still, this was far-and-away the best Mets preview I have read yet. Well done!

Thanks so much for the nice note — much appreciated, especially from a hardcore Mets’ fan!

Always good to hear that someone is enjoying what you’re doing.

Thanks for the reply regarding the letter I sent you about Brendan Donnelly being the closer for the Red Sox.

As an aside, during the most recent interview with Terry Francona (on MLB.com) the question regarding The Nation’s future closer was brought up. At that point Francona said there would only be four possible candidates…And can you guess the very first pitcher’s name that came out of his mouth?

In fact, he had trouble remembering the fourth pitcher’s name…his name?

If you haven’t seen the interview, it’s great.

Thanks for all of the great reads.

Hmmm….that’s more than just a bit interesting about Francona’s comments. Well, like I said, I would love to be proved wrong here. As long as Boston has a dependable closer and his name doesn’t rhyme with Bonbon, then I’m good.

Thanks for the note and the support!

I have a quick question about fantasy baseball. I’m in a keeper league that allows seven players to be kept. It’s a 6×6 format with walks (but that could change). The players I have that are good are: Miguel Cabrera, Carlos Beltran, Scott Kazmir, Jake Peavy, Alfonso Soriano, Bobby Abreu, John Lackey, Jimmy Rollins and K-Rod.

Who do I keep?

Also, I have a potential side deal with a team that has only four legit keepers whereby I trade him my two rejects and my seventh keeper for Ryan Howard.

This is tough because ideally you’ll want to keep more than one starting pitcher, but I see Peavy as the only obvious keeper on this list.

So that means trading K-Rod, Lackey and Kazmir for Howard, which is a slam dunk considering it’s really only one of those players for him. You’re going to lose the other two anyways, and if this team only has four keepers, they can’t be much of a competitor this year, so I doubt the deal comes back to haunt you in 2007.

I am a huge fantasy baseball fan and read every article written on Rotoworld.’I won my league last year thanks to the guidance provided to me on the site.’It is a keeper league and I have a few tough decisions and I was wondering if you could help me out.’Thank you so much for your time.

I have to keep three of these: Garrett Atkins, Hanley Ramirez, Brian McCann, Trevor Hoffman, and Curt Schilling (I’m leaning towards Atkins, Ramirez, and McCann).

I have to keep two of these: Derek Jeter, Grady Sizemore, Chris Carpenter and Adam Dunn (I’m leaning towards Sizemore and Carpenter).

I have to keep one of these: David Ortiz and Carl Crawford (leaning towards Crawford).

Hopefully you can help me out, thank you so much.

Glad to hear you’re enjoying Rotoworld and that it helped you bag a title.

Of your keeper choices, I think you’re bang on with your instincts for all three groups. No way can you keep Hoffman or Schilling over those three young studs.

The group of two is harder. Carpenter and Sizemore and great picks, but you could make an argument for Jeter over either one of those. But given that you’ve already got Ramirez, I suppose letting Jeter go makes sense, as painful as that will be. (Unless, of course, you can deal Jeter for another pitcher worth keeping, maybe Roy Oswalt or even Brandon Webb?)

I approve of all your choices, man!

I recently just made an NL-only trade. I really feel I got a steal in this one.

If Alou stays reasonably healthy, wow. A big if, though.

I now have four starting pitching keepers all for $1: Chris Carpenter, Webb, Brett Myers and Matt Cain. Also, I have Ryan Dempster at $3 and Bob Wickman at $10. Okay closers, not too reliable. My bats are Matt Holliday, $1 and Felipe Lopez, $9. It hurts trading LaRoche because it makes my offense weaker, but I really don’t need to spend anything on pitching now. I am set in Ks, ERA, WHIP and wins. What are your thoughts and who are some offensive guys I should draft? Also, can you give me a couple of low-priced pitchers with good ERA and WHIP to add to my six-man rotation. I was thinking Greg Maddux depending on his bid and Matt Morris. They both have good ERAs and WHIP. We have Garrett Atkins for $29. I might keep him, but i don’t like keeping guys that expensive.

That sounds like a good deal for you, congrats.

In terms of hitter and pitchers you should draft, it’s difficult without knowing who’s available and how many teams are in the league, but here are some names I’d target:

Hitters — James Loney has serious sleeper potential and should come very cheap; Chris Burke is a good breakout candidate, and he’ll likely qualify at OF and second base; I think Chad Tracy could show a lot more than he did last season; Josh Bard is a great backstop to target; and I’m very bullish on Chris Duffy’s prospects for this season.

Pitchers — Cole Hamels will be relatively inexpensive for the last time this year; Chuck James can be had for fairly cheap and should provide a great return; and Ted Lilly may fly under the radar as it’s been a while since he was an NL-pitcher, but he should be better in the Senior Circuit.

Hello. If you had to keep four players off of this roster who would they be?

Oh ya, these are always fun, aren’t they?

I’d go with: A-Rod, Abreu, Holliday and Hanley Ramirez. Atkins is a close fifth, but you’ve already got the best third baseman in the biz. Besides, I love Ramirez’s upside, especially in a keeper league. If you want a pitcher, perhaps you can deal Atkins and Holliday for a keeper-worthy stud?

By RotoRob
This entry was posted on Tuesday, February 20th, 2007 at 3:40 pm and is filed under BASEBALL, Dear RotoRob, RotoRob. You can follow any responses to this entry through the RSS 2.0 feed. You can leave a response, or trackback from your own site.