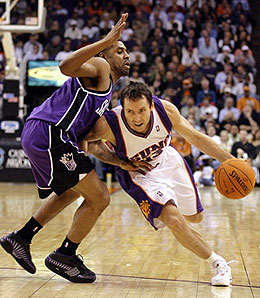 Did you just hear a big gulp? No, I don’t mean the 75-million calorie type you get at the 7-11. I’m talking about the kind that forces fantasy owners everywhere to cross themselves upon hearing news as they did today that Steve Nash is in trouble. A shoulder injury will send Captain Canada to the sidelines for at least one game, and perhaps more. Worried? I’d be. We tackle Nash’s shoulder woes in today’s Daily Dose.

The Mavericks’ home winning streak doesn’t appear to be in much jeopardy; the Clips look to down the Knicks for the fifth straight time; Vince Carter had a nice night, but not enough to save the Nets; The Blazers miss Nash, but will have to deal with Amare Stoudemire tonight; and Brendan Haywood has taken complete control of the centre job in Washington.

We’ve got all this plus enough fantasy basketball blurbs to make you get over Prince’s Super Bowl performance in today’s Daily Dose.

By RotoRob
This entry was posted on Tuesday, February 6th, 2007 at 5:19 pm and is filed under BASKETBALL, NBA Daily Dose, RotoRob. You can follow any responses to this entry through the RSS 2.0 feed. You can skip to the end and leave a response. Pinging is currently not allowed.