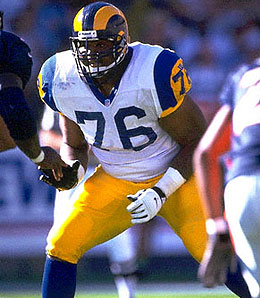 A season-ending injury to Orlando Pace robbed Torry Holt of much of his value.

1. Steve Smith – Last year Smith was widely considered the top fantasy wide out (he was number two on my list, but having Tory Holt ahead of him probably isn’t worth bragging about), however, nagging injuries cost him superior statistics. My knock on Smith this past preseason was his inconsistency, but he actually improved in that category this season. The final stats will knock Smith’s value down, but savvy owners should have been impressed with his eight games out of 14 with a touchdown (compared to nine out of 16 in 2005) and 10 games with either 100 yards or a touchdown (compared to 11 in 2005).

2. Tory Holt – The Rams’ move to a more conservative offense hurt Holt in 2006, but Orlando Pace’s injury in Week Six was the true nail in the coffin for the team’s star wide out. Before Pace’s triceps tear, Holt averaged 88 yards and 1.2 touchdowns per game. After Pace’s season-ending injury, Holt went for 66 yards and 0.3 scores per game. The numbers are just so black and white.

4. Chad Johnson – News flash: Johnson doesn’t score that many touchdowns. That may be surprising to the average football fan, but anyone who has had Ocho on their fantasy squad should be familiar with the line ‘Good yardage day, could have used a score, though.’

5. Reggie Wayne – One of these years, Harrison will begin to fade and Wayne will become the clear cut number one guy. It has to happen. Anyway, as long as Peyton Manning is around, Wayne will get his stats.

6. Anquan Boldin – I am unabashedly the biggest Boldin fan on the planet. That being said, his 2006 statistics left me a bit underwhelmed. On one side of the coin, he was only 100 yards and three touchdowns away from Johnson. On the other side, he had only as many touchdowns as Patrick Crayton. Oh well. Matt Leinart should progress, which means more yards and yes, maybe more touchdowns for the toughest wide out in the NFL to tackle.

7. Larry Fitzgerald – Boldin and Fitz are kind of like Michael Jordan and Mia Hamm. Except, they get along better. And neither can play soccer well (I assume). Also, both have yet to lead their team to the postseason, let alone a bajillion world titles. But other than that, they’re exactly alike. Anyway, if Fitzgerald plays 16 games, expect 100 receptions and 1,400 yards from the former Pitt Panther.

8. Roy Williams – For some reason, Williams scares me. I mean, aside from looking like the meanest person to ever play at wide receiver, I am less than keen on taking him as my top wide out next season. If the Lions’ quarterback problem is solved, then maybe I’ll bump Williams up a couple spots. But right now, I don’t know if he’s better than Mike Furrey. And Furrey might not even be a wide receiver. I’m really not sure.

9. Terrell Owens – As I’ve said since I started writing here at RotoRob, Owens is the best wide out in the game when he’s on the field and happy. Unfortunately, his knack for being injured or crazy makes him as risky a pick as there is at the position. The first year in Big D went, well…I was going to say bumpy. But compared to his second year in Philly, it was a relatively smooth ride. Bill Parcells is out, so what can possibly go wrong next year?! (Famous last words…)

10. Marques Colston – Colston proved himself to be one of the tougher players in the league last season. Yes, nagging injuries cost him playing time, but the vicious hits he took would have sidelined lesser players for much longer. If he can learn to protect himself from the huge shots and stay on the field, he has 100-catch, 1,300-yard, 12-touchdown potential.

By Andy Goldstein
This entry was posted on Monday, February 5th, 2007 at 11:55 am and is filed under Andy Goldstein, Cheat sheets, FOOTBALL, Gridiron Goldstein. You can follow any responses to this entry through the RSS 2.0 feed. You can leave a response, or trackback from your own site.