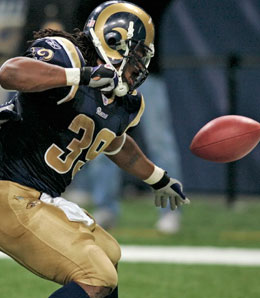 Could Steven Jackson become the number one fantasy football stud in 2007? Andy says there’s a great chance it could happen.

1. LaDainian Tomlinson – No, he probably won’t duplicate his 2006 statistics, but there’s no way anyone else can be at the top of this list. Besides, something tells me his fire won’t be lacking next year.

2. Steven Jackson – 2,334. That’s how many total yards Jackson had last season. That’s more than Tomlinson. In fact, it was the highest total in the NFL. Over the final four weeks of the season, Jackson totaled 10 touchdowns. That’s six more than Larry Johnson. With the Rams attempting to transition to a more and more conservative offense, Jackson could easily be the top scoring fantasy performer in 2007.

3. Larry Johnson – It might be surprising to see Johnson in the third slot of this list. Early indications show that he will be second on just about every pre-season list in seven or eight months. I will have a post fleshing out my full thoughts, but for now I will simply say that I’d steer clear of the Chiefs back next season. I put him at three because his value is this high. Unfortunately, I’d be surprised if he ends up anywhere near the top of the list. Much as I wrote about avoiding Shaun Alexander last season, Johnson is in for a big drop. His epic workload (416 regular season carries) alone is a huge red flag. The Chiefs’ offense is aging and won’t be able to take any burden off the star back. Finally, a once dominating offensive line has fallen back to the pack. It’ll be hard to avoid Johnson if you have the second or even third pick, but weren’t we saying the same thing about Alexander last season?

4. Willie Parker – As I detailed in my early 2007 Quarterback rankings, I am hopeful that the Steelers offense will, if nothing else, have more stability than last season. That’s what made Parker’s campaign all the more impressive. His quarterback was completely out of sorts, which led to many unceremoniously quelled drives. If Ben Roethlisberger keeps his head on straight (ugh, sorry), there’s no reason the offense as a whole can’t improve.

5. Frank Gore – Please sir, I want some more. Gore was as good as anyone could have hoped last season. After years and years of terrible knee injuries in college, the second year player blossomed. Now, the obvious question is about his ability to stay healthy. If I knew for sure that Gore would play 16 games (hell, even 14 or more games), I would have little problem taking him with the third pick. He is as talented as any back in the league short of Tomlinson.

6. Rudi Johnson – It doesn’t get more boring than this pick, and I say that in the nicest way possible. Johnson has accounted for 1,300-1,460 yards and 12 touchdowns each of the last three seasons. There’s really not much to say. Lock it up.

7. Clinton Portis – So, umm, Dolemite Jenkins, we need you. We need you to brighten our midweek boredom. We need you to remind us that some players have a sense of humor. And we really need your 1,700 total yards and double digit touchdown totals.

8. Shaun Alexander – Alexander is now a poor man’s Johnson to me. I think he’ll be good for 1,300 yards and eight to 10 scores. Unfortunately, there’s not much upside anymore. He remains an injury risk, and he’s certainly not getting any younger.

9. Brian Westbrook – Much like Gore, I’d put Westbrook a couple slots higher if I knew he’d play 14 or more games in 2007. His penchant to suffer nagging injuries has always held, and probably will always hold Westbrook back from being a top end fantasy player.

10. Maurice Jones-Drew – Obviously, this is subject to change, but, if the chips fall properly, Drew could vault even higher. First, look at the numbers. He ran for 941 yards on a mere 166 carries. That’s a stunning 5.7 yards per attempt. (I was excited about Gore’s prospects after a 4.8 average in 2005 on 127 carries.) Then there’s the touchdowns, 15 to be exact, including a rookie record of eight consecutive games with a score. Well, his weakness must be receiving, right? Not quite. Jones-Drew managed 46 receptions for 436 yards. Did I mention he only started a couple games towards the end of the season? Yes, Jones-Drew’s fantasy status hinges on Fred Taylor wearing a jersey that isn’t teal next season. The Jaguars’ defense needs to continue to keep the offense on the field. The Jacksonville passing game needs to continue being inconsistent. Yes, lots of ifs, but all seem reasonable at this point.

By Andy Goldstein
Tags: Running Back Rankings
This entry was posted on Sunday, January 21st, 2007 at 4:24 pm and is filed under Andy Goldstein, Cheat sheets, FOOTBALL, Gridiron Goldstein. You can follow any responses to this entry through the RSS 2.0 feed. Both comments and pings are currently closed.