Three in the Key: Are Hawks Ready to Soar in Second Half? 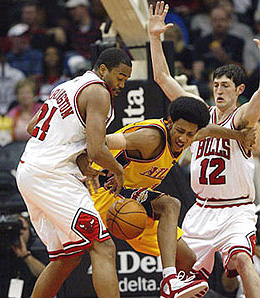 And then came the injuries. Speedy Claxton, Marvin Williams, Josh Childress, Joe Johnson, Tyronn Lue, Zaza Pachulia, Josh Smith, Lorenzan Wright. Sounds like a pretty good team, doesn’t it? Well, who would know, as various injuries have robbed the Hawks of many of these players for long stretches of the season, resulting in a 6-22 skid that was finally stemmed Friday night with an improbably win over the Pistons.

But the damage has been done, and what appeared to be a season of promise has turned into the oh so familiar sight of the Hawks floundering in the Southeast Division basement and the prospect of a playoff spot ‘ even in the weak Eastern Conference ‘ looking remote.

Things have been so grim that in the past couple of weeks Atlanta has been forced to add Stanislav Medvedenko and Dijon Thompson to the mix ‘ two names that aren’t exactly going to strike fear in the hearts of their opponents. (In fairness, however, former UCLA star Thompson, a fine shooter who can also rebound, looks like he could stick and he was lighting it up with over 20 PPG in the D-League before the Hawks signed him.)

Yet, there is so much promise here, you can’t help but believe that the Hawks are capable of a huge second half. At the top of the list of positives for the Hawks this season is Johnson, enjoying a tremendous breakout year as he establishes himself as a bona fide star. Although his rebounding has slipped slightly and his assists are down quite a bit, Johnson’s shooting has never been better and it’s enabled him to post 25.1 PPG. Those concerned with his recent play needn’t worry after he snapped a shooting slump by draining 13-of-17 for 34 points on Friday. If Johnson is ready to start rolling again, it can only mean good things for the Hawks. They’re 7-4 when he manages 30 points or better.

Of course, Johnson’s struggles have coincided with the loss of Smith to hernia surgery. After two and a half weeks on the sidelines, he returned Friday, earlier than expected, and what a boost he provides. Smith’s shooting has slipped slightly, but even when he’s not scoring, he can help the team in so many ways. He’s still a block party waiting to happen, has boosted his steals significantly and is the team’s best rebounder. Most importantly, his presence will mean opponents can’t simply double team Johnson. Think the Hawks didn’t miss Smith? They went 1-7 while he was out.

The loss of Childress to a broken bone in his foot was also devastating. He’s ridden his outside game to quickly become one of the better sixth men in the NBA this year.

Pachulia, currently out with an ankle injury, isn’t playing as much as he did last year, and that’s affected his rebounding numbers, and I wouldn’t mind seeing a few more block from the big man, but he’s improved his FT shooting, and it’s helped him become more of an offensive threat this season.

Marvin Williams has been struggling from the floor (38.5 per cent) and has not been as active on the glass this year, but he’s been doing a good job of getting to the line, allowing him to become a better offensive threat. Keep in mind, he’s just 20 years old and judging by Friday’s line ‘ 12 points, nine boards, seven assists ‘ the former Tar Heel could be in line for a huge second half now that he’s healthy.

Rookie Shelden Williams, about to combine with J.J. Redick to swell the ranks of Duke players to have their numbers retired to 13, has been solid if unspectacular this season. He’s thrown up the occasional block and has done some nice work on the glass (tied for third on the team with over six rebounds per game), particularly on the offensive end.

The Hawks, long criticized for failing to address a key need when they passed over worthy point guards in recent drafts (Chris Paul, anyone?), thought they had bagged their man this offseason when they brought Claxton in. While he leads Atlanta with almost five assists per game, Claxton has been a huge disappointment ‘ when he hasn’t been injured that is. His shooting has been awful, he offers no perimeter game, and his overall scoring is way down. Claxton shows glimpses on occasion, but he’s far too injury prone and inconsistent to be a legitimate floor general.

Atlanta could be back to the drawing board with this one, considering how poor Lue does as a starter. Besides, Lue is still struggling with a groin strain and Coach Woodson wonders whether his second-leading scorer will have to deal with this problem all season. Another lottery pick likely looms for the Hawks this season, but 2007 is a poor draft year for point guards, and other than Chauncey Billups, who can opt out of his contract, the pickings are slim among potential free agent PGs this summer. Mo Williams would be a great addition, but beyond him, Smush Parker and Chucky Atkins head the class. Slim pickings indeed.

While it was a huge game, Friday’s win over Detroit was just the third victory in the past 17 games for Atlanta, so let’s not break out the bubbly just yet. But with a date looming this afternoon against a Celtics’ squad that’s beat up even worse than the Hawks, Atlanta could be in store for its first winning streak since ‘ you guessed it ‘ that lofty 4-1 start. Let’s not print up any playoff tickets just yet, but there’s plenty of basketball to still be played this season, and this Hawks’ team has the talent to make some serious noise.

By RotoRob
This entry was posted on Monday, January 15th, 2007 at 12:21 pm and is filed under BASKETBALL, RotoRob, Three in the Key. You can follow any responses to this entry through the RSS 2.0 feed. You can skip to the end and leave a response. Pinging is currently not allowed.