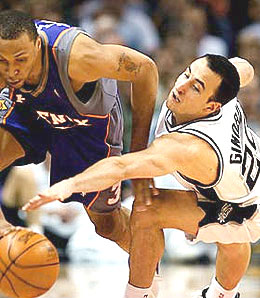 If you could parlay Manu Ginobil, right, in a package deal for Amare Stoudemire, go ahead and make the trade.

I am thinking of packaging Manu Ginobili and Chris Kaman in a deal for either Chris Bosh, Amare Stoudemire or Pau Gasol.

Who do you think has more value the rest of the season?

They all come with a bit of risk, but at this point, I am just so impressed with the recovery of Stoudemire. I went to last Wednesday’s game in Toronto and he was simply a beast in the middle. Man, has he ever stepped up his defensive game with the blocks and boards.

Gasol would be my second choice because of that FG percentage (Amare’s is even better though), followed by Bosh (who looked amazing Wednesday too).

Okay, so here is the draft so far:

I was unsure about Bonser and Humber, but I took the chance on them being the final pieces to my future rotation. I took your advice and grabbed Villanueva in round 2. I took Martin because I can use him as trade bait as I already own Brian McCann. Fields is my 3B of the future…I hope.

What do you think of this so far? What grade would you give this draft?

I prefer Humber to Bonser, although Humber does seem to be a bit fragile. Having said that, I think he’s got a good chance to leave spring training as the Mets’ fifth starter.

As for Fields, I am very high on him (I profiled him in an August Podcast), but as I noted then, depending on how things shake out with Joe Crede, the Sox could move Fields to OF. My guess is Chicago wants to deal Crede, but beware that Fields may never play third if Crede sticks around.

Villanueva may be pushed to the Triple-A to start the year because of the Jeff Suppan signing, but don’t despair. Ben Sheets is plenty injury prone and I still love Villanueva long-term. He’s opened some eyes in the organization.

A grade? Hmmm….bell curve or standard? Ah…let’s give it a B+, higher if I liked Bonser more. It’s just that other than saying his name, I am not a huge fan of his. Maybe he’ll prove me wrong. At least he has a guaranteed gig, and that’s half the battle.

I need your advice again. I have been offered Dwight Howard, Chauncey Billups and Jarrett Jack for Paul Pierce, Stephon Marbury and Big Ben. Do you think I should do it?

I like this deal for you. It really helps you in assists, FT percentage and FG percentage. Yes, it’s going to hurt you in 3-pointers, and to a lesser extent in rebounds and blocks, but not enough to negate the big gains.

Billups will be back soon, Howard is a machine (and, damn, he even nailed his first ever 3-pointer last week!) and Jack, while in the doghouse a bit, still has 26 assists in the past three.

Losing Marbury just as he’s starting to score hurts, but Pierce is another two weeks away. Wallace is on a rebounding roll, but big deal – in Howard, you’re getting the best in the biz.

I recently declined a trade request of Rasheed Wallace for Mike Miller.

By RotoRob
Tags: Chris Bosh
This entry was posted on Sunday, January 14th, 2007 at 12:58 pm and is filed under BASEBALL, BASKETBALL, Dear RotoRob. You can follow any responses to this entry through the RSS 2.0 feed. Both comments and pings are currently closed.