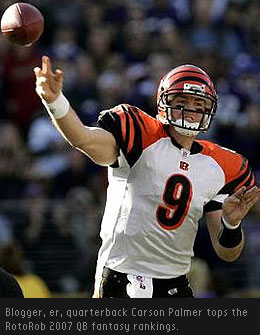 Most fantasy football writers are focusing on what transpired this past season. They’ll talk about LaDainian Tomlinson and Daunte Culpepper. They’ll debate about Maurice Jones-Drew and Vince Young. I’ve done some of that already, and I will do a bit more looking back in the coming weeks. But winning your 2007 fantasy football league starts now. A lot of things can change between now and opening week next season, but there’s more that will stay pretty much the way we expect it to. So let’s look ahead at early rankings for next season, starting at the quarterback position.

1. Carson Palmer – Peyton Manning had never led fantasy quarterbacks in scoring, but used a big Week 17 to surpass Drew Brees this past season. I expect the ‘Manning finishing second’ trend to reappear next season as Carson lights up the scoreboard. Palmer is a tad riskier, but he has more weapons, a more consistent running game, and ummm, a blog, apparently! I don’t know if the blog is really his, but there’s nothing phony about his place atop the ’07 fantasy quarterback rankings.

2. Peyton Manning – You know you’re getting one of the top signal callers in the league. An aging Marvin Harrison and a defense that can’t get off the field are both reasons for worry for the Golden One. But even if everything goes wrong, Manning will approach 4,000 yards and 30 touchdowns.

3. Drew Brees – Obviously, 2006 was a career year for Brees. Knowing that, it’s important not to reach on the Saint in your draft. At this stage, I wouldn’t consider drafting him before the third round. Still, he and Marques Colston should form one of the better quarterback to wide out connections in 2007.

4. Mike Vick – Maybe he is a coach killer. Maybe he can’t read a defense. Maybe he’s the most inaccurate 16-game starter the NFL has ever seen. It doesn’t matter in fantasy football. Vick averaged 65 rushing yards per game and was consistently a top scoring quarterback. The Falcons have a new coach, which means anything could happen come 2007, but if Mr. Mex…er, Vick, is given any free reign, he’ll continue to rack up fantasy points.

5. Marc Bulger – Thanks to (or despite?) Scott Lienehan’s more conservative blocking schemes, Bulger passed for over 4,000 yards for the first time in his career. The Rams had what I consider a strange season. They had a dominating run game, used extra protection often, but still gave up the fourth-most sacks in the NFL. It makes less sense than if Donald Trump and, say, Rosie O’Donnell got into a feud! Oh…wait…never mind. Anyway, I hope the Rams bolster the receiving game. Isaac Bruce is getting up in age and Kevin Curtis’ production fell by nearly half.

6. Ben Roethlisberger – Many fantasy football ‘experts’ are too knee-jerk reactionary when it comes to prognosticating. Roethlisberger is my early pick for 2007 quarterback sleeper of the year, and he’s probably about 10 spots higher on this list than he will be on most pre-season cheat sheets. We all know what happened last preseason. His face hit a lot of un-movable objects and then he needed an appendectomy. Big Ben would have had a better season if he just went hunting with Dick Cheney every day. Ok, that may not be true, but as long as he doesn’t almost die twice this offseason, all the pieces are there for him to have a big year. He’s got a deep, talented wide out group and a run game that demands attention. A lot will hinge on how good the defense is and what kind of coach the Steelers peg to lead them, but as of now, this guy should be a weekly fantasy starter next season.

7. Vince Young – I am sipping the kool-aid. (Aw, remember when he was funny?) Young reminds me of an early Donovan McNabb. Naysayers will point to Young’s completion percentage (49 per cent) and poor touchdown to interception ratio (0.9:1) as to why he can’t be a top 10 signal caller. Of course, Mr. Chunky Soup saw significant jumps in his completion percentage (51 per cent to 58 per cent) and touchdown to interception ratio (1.1:1 to 1.6:1) in his sophomore season. I expect similar increases for Young.

8. Matt Hasselbeck – There’s not too much to say about Hasselbeck. Injuries slowed his season, but he still managed to average better than 200 yards passing per contest. Hasselbeck’s season probably rests on how good the pieces are around him. If the team rebounds, the passing game will go back to where it was the last couple of seasons. Not a ton of upside here, just an opportunity for rock solid consistency.

9. Tom Brady – Having no wide outs didn’t help Brady, but those who only look at his yearend numbers wouldn’t be able to tell all that well. Where Brady had two of 15 games with fewer than 200 yards passing in 2005 (he hardly played Week 17), he had six out of 16 under 200 yards this past season. That’s deadly inconsistency to fantasy owners.

10. Matt Leinart – This ranking is based on the idea that the Cardinals will, you know, draft a lineman or two that deserve to start in the NFL. If they manage to protect the former USC star, the sky is the limit. No wide out group has more talent and few defenses will let up more points than Arizona’s. It’s the perfect storm for a breakout year.

By Andy Goldstein
This entry was posted on Saturday, January 13th, 2007 at 12:50 pm and is filed under Andy Goldstein, Cheat sheets, FOOTBALL, Gridiron Goldstein. You can follow any responses to this entry through the RSS 2.0 feed. You can skip to the end and leave a response. Pinging is currently not allowed.