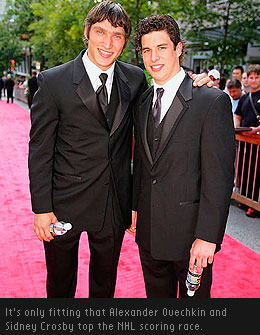 Don’t look now but guess who’s No. 1 and 2 in NHL scoring? Yup, it’s the Sidney Crosby and Alexander Ovechkin Show (not to be confused with the Malkin and Crosby Show). It hasn’t helped to push their teams into firm playoff positions, but it certainly is fun watching the two brightest young stars push each other. Crosby’s points-per-game is higher than Ovechkin’s, but Ovechkin can turn it on into bunches of scoring. This is one to watch coming down the line.

Mike Comrie isn’t exactly taking the ball and running with it in Ottawa. He’s getting his share of ice time; still, considering that the Sens have scored 19 goals in Comrie’s four games, you’d think he’d have more than just one goal and two assists (both assists coming in his first game).

Finally, the Marian Gaborik show returns! In other “superstar returns from injury news,” the oft-injured Martin Havlat is back in the lineup, ready to try to pull the Blackhawks out of their latest tail spin.

He may not be as flashy or recognizable as Ovechkin, but Capitals super-rookie Alexander Semin is on pace for 40+ goals. There was a lot of hype behind Semin prior to the season and he’s living up to it, making him one to watch for all of you readers in keeper leagues.

The Phoenix Coyotes are one of the hottest teams in the league right now and a big part of that is the resurgence of Shane Doan. Doan wasn’t hitting the mark during the 2006 part of the season but since the New Year, he’s got five goals in five games. Doan’s not good enough to keep up his hot pace but he should settle into a regular rhythm rather than the huge drought he dealt with for most of the season.

Jonathan Cheechoo has disappointed fantasy owners this season but they can take heart in that he’s riding a small streak of six points in four games. More importantly, half of Cheechoo’s goals have come since December, meaning that he’s starting to pick up his game after a little Rocket Richard trophy hangover.

In the “He’s still in the league?” category, Jozef Stumpel is riding the coat-tails of Olli Jokinen into a small hot streak down in Florida. With seven points in six games, Stumpel is due to drop back down to earth fairly soon (he scores in bunches), but keep an eye on him. Chances are, he’s available in most fantasy leagues and if you see him get an assist or two after a slump, he may be a good pickup for a week.

What happens when you get a healthy Wade Redden? You get a four-game point streak and 10 points in his last nine games, even with the Sens power play dealing with the loss of Jason Spezza.

After a brief dip to second place, the San Jose Sharks are back on top of the power play percentage list. The good news for fantasy owners? Rookie Matt Carle, sent down to the minors for a brief conditioning/get-your-head-out-of-your-butt stint, is back with the big club and will get a chance to contribute to the league’s best power play.

Peter Forsberg is back again, but who knows how long will he stay? Fantasy owners, play him while you can. If, however, Forsberg gets moved to a Cup contender, watch his point totals explode — when he plays.

In Anaheim, it looks like Jean-Sebastian Giguere’s minor injury will last a little longer.That means that Ilya Bryzgalov, just back from a groin injury, will get the bulk of starts. Will he steal Giguere’s job like he did last season during the playoffs? It’s better to have two good goaltenders than one, after all.

In other goalie news, Marty Turco is hitting a skid with an ugly .831 save percentage over the past few games and an even uglier 4.04 goals-against. The normally stingy Dallas defense didn’t help, giving up 19 goals over the past four games.

By Mike Chen
Tags: Sidney Crosby
This entry was posted on Friday, January 12th, 2007 at 3:44 pm and is filed under HOCKEY, Ice Chips, Mike Chen. You can follow any responses to this entry through the RSS 2.0 feed. Both comments and pings are currently closed.