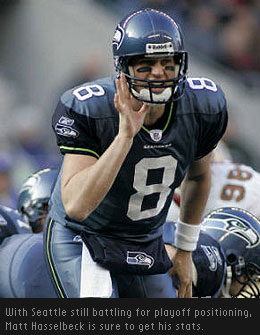 Seattle at Tampa Bay – Ladies and gentlemen, your 2006-2007 NFC West champions: the 8-7 Seattle Seahawks! The Seahawks are still playing for playoff positioning, so I’d expect Matt Hasselbeck and Shaun Alexander to get their stats. The wide outs have been inconsistent with Darrell Jackson injured, so only use Deion Branch as a third option.

St. Louis at Minnesota – Stephen Jackson actually has a very interesting matchup in this game. On one hand, the Vikings possess the top-ranked run defense in the league, but Jackson is certainly not a one dimensional player. His ability to gain yards out of the backfield as a receiver makes him a must play every week. Marc Bulger, Tory Holt and Isaac Bruce are all fantasy starts as well, as the passing game finally showed signs of life last week. For the Vikings, Chester Taylor remains the only entity worth considering.

Arizona at San Diego – Somehow, Kurt Warner is a good play this week. The veteran quarterback knows the Cardinals offense and knows the talented wide out duo of Larry Fitzgerald and Anquan Boldin. Leave Edgerrin James on the bench, since the already tough Chargers run defense will be motivated to gain a victory in this one. Of course, you know to start LaDainian Tomlinson and Antonio Gates. Both will find the end zone.

Atlanta at Philadelphia – Mike Vick is a start, I guess. He is, after all, the second- or third-ranked fantasy quarterback depending on your league’s scoring. In their last regular season meeting, Vick had 68 rushing yards and a score, so there’s that. On the other side of the ball, keep rolling with Jeff Garcia! The Falcons pass defense is…umm…outmatched. (That felt dirty to write.) Brian Westbrook is a must start, but the rest of the offense is too inconsistent to trust.

Buffalo at Baltimore – Lee Evans and Mark Clayton are the starts of the game. Both young wide outs are enjoying breakout seasons. Leave Willis McGahee on the pine against this Ravens suffocating run defense. Jamal Lewis, on the other hand, should find some open spaces to rumble through. The former Vol has seven touchdowns in his last five games.

Miami at Indianapolis – Come Week 17, some NFL teams have long thrown in the towel. The Dolphins are one of those squads. They are starting some guy named Lemon at quarterback. I’m sure he has a first name (unless he’s like the NBA’s Nene). Seriously, what’s up with that? This isn’t Brazilian soccer…err…sorry…foosball), but if an NFL team has given up on their season, I give up on writing about them. Ronnie Brown is only a decent option because of how historically inept the Colts run defense is. And start your Colts, obviously.

San Francisco at Denver – Frank Gore is going to set a franchise rushing record, Tatum Bell will pretend as if barely surpassing 1,000 yards is a great triumph in today’s NFL, and Javon Walker will catch a long touchdown pass. So, it’s pretty much just like any other day for the ‘Niners and Broncos.

And that’s it. It’s been a fun fantasy season. I hope there were lots of championships won by my readers. And let’s be honest, if you read my columns, you probably won. I already have my sights set on the 2007 fantasy season, so don’t stray too far. Those columns will start appearing in the next couple weeks. ‘Till then, I go back to my full-time position at the Ministry of Silly Walks.

By Andy Goldstein
Tags: Seattle Seahawks
This entry was posted on Saturday, December 30th, 2006 at 4:22 pm and is filed under Andy Goldstein, FOOTBALL, Gridiron Goldstein. You can follow any responses to this entry through the RSS 2.0 feed. Both comments and pings are currently closed.