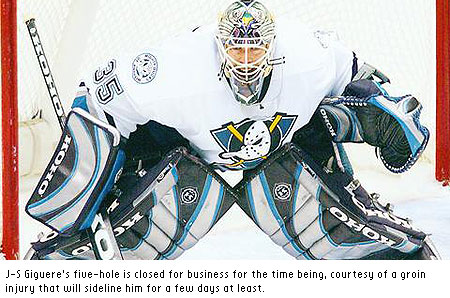 Goalies are going down left and right, leaving some teams scrambling for replacements. In Anaheim, J-S Giguere’s all-star season was interrupted by a nasty groin injury. With Ilya Bryzgalov still out, the Ducks have turned eastward for help and acquired Sebastian Caron. Guess that means they don’t have much faith in rookie Michael Wall, despite his perfect goalie’s last name. In other goalie news, Pascal Leclaire is also out with a knee problem, meaning that Fredrik Norrena will get a chance to prove whether or not he belongs.

Sidney Crosby’s monster point streak finally ended with a shutout against the Devils. I’m thinking he won’t go pointless for too long — just a hunch!

Ed Belfour has been one of the recent pleasant surprises for a Panthers team that has strung together some wins. However, Florida fans will discover that the Eagle’s back is as tempermental as his attitude, so Alex Auld shouldn’t feel too threatened.

The New York Rangers have lost five straight. During that time, however, it’s been mostly their defense and goaltending that have let them down. Henrik Lundqvist’s save percentage is under .900 — not good for any starting goalie, especially a playoff contender.

The Ottawa Senators are feeling the pressure. First Jason Spezza goes down, now Mike Fisher’s partially torn MCL will have him out at least a month. Spezza and Fisher were the glue that held the Sens together in the middle, so look for Dany Heatley and Daniel Alfredsson’s numbers to slow down. Too bad the Sens don’t still have Martin Havlat.

More injury woes in Dallas: First Mike Modano, then Eric Lindros (though he’s been pretty awful this season), and now Brenden Morrow is out with the nastiest injury so far this season — severed wrist tendons. You can picture that in your mind’s eye while you contemplate the fantasy implications. The Stars are extremely disciplined, so expect even more tight-checking games and 2-1 victories from them.

Dan Cloutier is out with a lower body injury. Does anyone care?

Peter Forsberg isn’t letting all this retirement talk slow him down. He had three assists in his return against the Lightning. Simon Gagne had two goals — coincidence? You make the call!

Unfortunately, Derian Hatcher isn’t on pace to be -100 anymore. That’s too bad; if he achieved that, he would have deserved some sort of anti-fantasy hockey award.

The San Jose power play has hit a bit of a cold streak. So have Patrick Marleau, Jonathan Cheechoo and Milan Michalek. You think there’s a connection between the two?

Anyone notice that Nashville’s Chris Mason is second in league save percentage? GM David Poile will be fielding more and more phone calls about Mason as the trade deadline approaches, meaning that some lucky veteran (Keith Tkachuk? Shane Doan? Bill Guerin?) may luck out as the Preds make a final push for a strong playoff run.

As we close out the calendar year of 2006, here are some players who have disappointed fantasy owners across the world: Joffrey Lupol, Mark Bell, Martin Gerber, Rick Nash, Anson Carter, the entire Phoenix Coyotes team, the entire Philadelphia Flyers team, Brad Richards, Jose Theodore, Todd Bertuzzi, Marco Sturm, and Henrik Zetterberg. For those about to suck, we salute you!

By Mike Chen
This entry was posted on Friday, December 29th, 2006 at 5:29 pm and is filed under HOCKEY, Ice Chips, Mike Chen. You can follow any responses to this entry through the RSS 2.0 feed. You can skip to the end and leave a response. Pinging is currently not allowed.