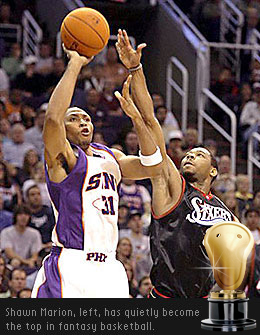 Happy New Year to all our readers! It’s been a great first year for RotoRob as we’ve enjoyed tremendous growth in our traffic every month since launching in late June. Special thanks to Team RotoRob: Andy Goldstein, Mike Chen, Tim Emery and, of course, the lovely RotoWidow, for making this possible.

And let’s not forget our readers. As a special thank you we offer you the first annual RotoRob Awards, divided into five categories: baseball, basketball, fashion and celebrity, football and hockey.

There are few players who can truly help you across the board the way Shawn Marion can. While he hasn’t been quite able to match last year’s ridiculous totals (52.5 FG percentage, 21.8 PPG, 11.9 RPG, 2.0 SPG, 1.7 BPG), he’s been damn close and has improved his FT shooting to 85.1 per cent this season. Not only is Marion an absolutely fantasy monster, but he’s probably the most underrated player in the NBA. Hell he’s not even considered the best player on his own team.

Isn’t it about time to strip Kenyon Martin of his K-Mart title and hand it over to its new deserving owner, Kevin Martin? Seven years after being taken first overall, Kenyon Martin continues to frustrate and disappoint his owners. Sure, his performance has been dragged down by injury (just 58 combined games the past two years and only two this season before season-ending surgery), but even at his best ‘ the season before wearing out his welcome in Jersey ‘ he wasn’t that good, especially from the line, where he’s always struggled. With career marks of 14.8 PPG and 7.4 RPG, Martin is almost in line for a career lack of achievement award. Honourable mention: Shaquille O’Neal. Isn’t it about time for Shaq to pull a Rocket Roger and just start his season late every year?

Chris Paul is a slam dunk here, but bear in mind that only a portion of his rookie season transpired in the 2006 calendar year. So who gets the nod for the 2006 portion of the 06-07 season? Believe it or not, Jorge Garbajosa is the man so far. Is he truly a rookie? Only by the NBA’s warped standards. But still, with a FG percentage that’s better than Adam Morrison (not that hard to do) and Andrea Bargnani, plus better rebounding skills than either, not to mention all the intangibles, I give the nod to Garbo. By season’s end, I believe Bargnani will have surpassed him, but these are the 2006 Awards, so’

We’re finally getting to see what Carlos Boozer can do when he’s healthy. Limited to 84 games the past two years, he is exceeding everyone’s expectations this season and has to be considered an early MVP favourite thanks to 21.5 points, 11.6 rebounds and 3.1 assists per game. Boozer has 23 double-doubles through 31 games.

Ron Artest, sentenced to one year of probation for his part in the legendary 2004 Indy-Detroit brawl, was ordered to perform community service as part of his sentence. So what’s he been doing to pay his debt to society? Well, it seems Ron-Ron has been spending time shaping young, impressionable minds by talking to children about his experiences.

Ah yes, that’s a good role model for kids. Here’s one of his gems from a talk in front of 50 children in Detroit: ‘Someone started trouble, and I ended it,’ he said of his part in what’s considered one of the worst brawls in American sports history.

Is there a parent out there that wouldn’t love their child coming home with that kind of message from an athlete they idolize?

There are plenty of candidates here (Stephen Jackson, Sebastian Telfair), but former NBAer Lonny (Looney?) Baxter has to take the cake for firing a gun out of his vehicle near the White House in August. Dude, of all the places in the world to blast away, could you choose a stupider location to get trigger happy? That stunt landed him two months in a different kind of house. Well, at least Baxter will now know what he’d look like in Bobat orange.

Why limit ourselves to gun chat when the Pistons’ Dale Davis had the pleasure of being Tasered by police while vacationing in Florida in August? Police were called to the scene of an argument that Davis was having with the hotel staff where he was staying, and after what Davis described as some racially motivated treatment by the cops, he called them rednecks. So they Tasered the 6’11’ Davis. Davis has since been cleared of all the charges, but let this be a lesson to all who are thinking about vacationing in Florida. Want footage? You got it.

The NBA dropped the ball big-time when it switched to the microfiber composite ball this season. Word recently broke on how the change came about. Apparently, Nanci Alexander, animal-rights supporter and wife of Rockets’ owner Leslie, convinced David Stern’s wife (a good friend of hers’) to put the bug in the commish’s ear that the old leather ball should be replaced with the current animal-free microfiber composite.

But let’s give some props to Stern and the NBA. After countless players moaned about the new ball (including stars like LeBron James), the association relented and will switch back to the classic leather pumpkin for 2007.

As an aside, Spalding is offering rebates to customers who bought the composite ball. Nice touch.

Unfortunately, animals will once again perish at the hands of the NBA, but hey, a shooter’s got to be able to shoot, right?

By RotoRob
This entry was posted on Sunday, December 31st, 2006 at 6:09 pm and is filed under Andy Goldstein, BASKETBALL, Mike Chen, RotoRob, RotoRob Awards. You can follow any responses to this entry through the RSS 2.0 feed. You can skip to the end and leave a response. Pinging is currently not allowed.