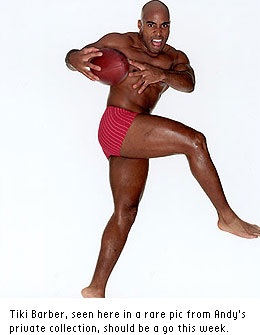 Ah, so you’re still reading these, eh? It’s Week 17! I guess I will allow it just this once. Remember for next year, though, to get your league to end your fantasy season in Week 16. Too often teams have clinched all they can clinch by Week 17. It leads to teams not using their starters for at least portions of games. No fantasy championship should be determined by a starter coming out at halftime.

N.Y. Giants at Washington – The Giants are in the driver’s seat for a playoff spot and basically just need to win to get in. Tiki Barber should be a go, and he’s not a bad start, although his chance at a touchdown remains on the ‘don’t count on it’ side. Plaxico Burress has been as frustrating as ever, so logic dictates he’ll have a great game. Jeremy Shockey, meanwhile, is iffy for the game, so look elsewhere if you can. As for the Redskins, it’s all about Ladell Betts. He’s been Washington’s constant ever since he took over.

Carolina at New Orleans – Ummm, are the Panthers fo’ realz? Steve Smith getting no catches is a travesty, no matter who their quarterback is. DeShaun Foster and DeAngelo Williams are stealing each other’s carries, which makes neither a safe option. Unfortunately, the Saints are one of those teams that have clinched all they can. Sean Payton has intimated that they will treat the game somewhere in between a regular season contest and a ‘fourth pre-season game.’ Whatever that means. Relying on Drew Brees, Deuce McAllister,Reggie Bush or Marques Colston will be very risky.

Cleveland at Houston – With both teams calling ‘uncle,’ this will definitely be one of the lesser-viewed finales Sunday. The Browns are actually starting Ken Dorsey. He’s a quarterback, for those that forgot. (I admit I had to look him up.) Braylon Edwards is having discipline problems while Kellen Winslow is listed as questionable. Just avoid the Browns. Ron Dayne and Andre Johnson could both score touchdowns, which makes both legitimate fantasy starts for the Texans. Here’s to 2007!

Detroit at Dallas – I’m going to be honest here: My hope for this game is that Roy Williams takes it to Roy Williams. That would be sweet. Yes, I’ve been waiting all season to write that. Yes, that’s sad. Whatever. The Lions top wide out has been something of a second-half bust, but you probably have to start him this week. Mike Furrey is also a legitimate option. The Cowboys are playing for a division crown, so I expect all starters to play the whole game. That makes Tony Romo, Marion Barber, Julius Jones, Terrell Owens and Terry Glenn good fantasy starts.

Jacksonville at Kansas City – Maurice Jones-Drew is riding a seven-game scoring streak, which ties the longest streak for a rookie in NFL history. I fully expect him to break the record against the Chiefs. Fred Taylor should play, but MoJo is the better start. The Chiefs are going to have to turn on the jets against a tough Jacksonville defense, but Larry Johnson and Tony Gonzalez are standard starts. For the record, Johnson will be a very risky pick next season. He already has 383 rushes this season, which means he has an outside chance at the most rushes for a season in league history (410). The reckless handling of this kid has put his career in jeopardy. (Just ask the current record holder, Jamal Anderson.) The Chiefs should be ashamed.

New England at Tennessee – The Patriots still have something to play for, sort of. They can move up to the third seed in the AFC with a win and a Colts loss. As long as this contest is close, I’d expect the starters to be playing. Tom Brady is a marginal start while both Corey Dillon and Laurence Maroney are flex plays. The Titans need a win desperately, so start Vince Young with confidence. The kid has been a fantasy savior this season. Travis Henry is listed as questionable and the Patriots run defense is strong. That’s a combination I’d avoid. Drew Bennett is a deep sleeper at wide out.

Oakland at N.Y. Jets – Stay away from me, Oakland! I’d rather have LaDainian Tomlinson quarterback the Raiders than either Aaron Brooks or Andrew Walter. The Jets have had a pretty incredible season and should find a way to win this one. Unfortunately, Cedric Houston and Laveranues Coles are both listed as questionable. Monitor the status of this pair. Either are worth starts if they play. Jerricho Cotchery is a decent sleeper, and his stock increases if Coles can’t go.

Pittsburgh at Cincinnati – I actually think this could be one of the more competitive games of the day. The Steelers are out of the playoff picture, but would love nothing more than to keep the Bengals from advancing themselves. Ben Roethlisberger is listed as questionable, but if the Steelers have any heart, they will keep the battered soul out of the lineup. Willie Parker might be the start of the game, as he had 146 total yards and two touchdowns against Cincinnati earlier this season. Hines Ward and Santonio Holmes are both weak wide out starts. As for the Bengals, start your engines and by engines, I mean the normal guys. You knew that.

And, while fantasy football is coming to an end, I will still be around every now and then. You’ll still get some insightful off-season fantasy themed columns from me. If that doesn’t do it for you, however, there’s also Grey’s Anatomy! Yay! I should probably do a column on that…

By Andy Goldstein
This entry was posted on Friday, December 29th, 2006 at 1:15 pm and is filed under Andy Goldstein, FOOTBALL, Gridiron Goldstein. You can follow any responses to this entry through the RSS 2.0 feed. You can leave a response, or trackback from your own site.