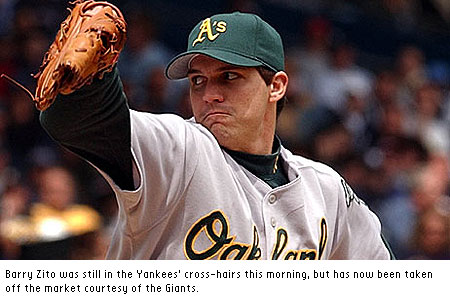 Randy Johnson could soon be on the move again. He’s requested a trade away from the Yankees and closer to his Phoenix home. We cover this issue in this week’s Offseason Lowdown.

While the second part of the plan for the Yanks was to sign Barry Zito, that obviously won’t be happening as we reported, considering news broke after we filed our story that Zito was signed by the Giants.

The Angels finally did something quickly, reacting to Juan Rivera’s injury by swifty snapping up Shea Hillenbrand. We check in on that situation.

You’ll get all this and several other recent fantasy baseball stories in this week’s Offseason Lowdown.

By RotoRob
This entry was posted on Thursday, December 28th, 2006 at 3:50 pm and is filed under BASEBALL, Offseason Lowdown, RotoRob. You can follow any responses to this entry through the RSS 2.0 feed. You can leave a response, or trackback from your own site.