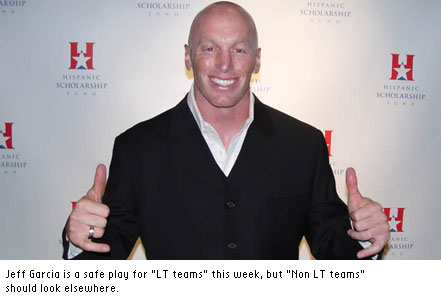 In case you couldn’t get to my first column this week, let me reiterate my methodology for previewing games for championship time. Due to LaDainian Tomlinson’s domination this season, almost every league is down to a team that has Tomlinson (The ‘LT team’) and a team that doesn’t (the ‘Non-LT team’). As I wrote a few days ago, the Non-LT team should take more risks. ‘Good’ days from players aren’t enough to overcome Tomlinson, since he cancels out two or three ‘good’ players per week. Go big. Try to find the equalizer.

The LT team, on the other hand, can play it closer to the vest. Jeff Garcia, for example, is a great play for an LT team, since he’s thrown at least one touchdown pass in all of his starts this season. On the flip side, I wouldn’t recommend Garcia to Non-LT teams, since he’s only thrown for over 300 yards and tossed three touchdowns once.

Tampa Bay at Cleveland – Awesome. The NFL went out and attempted to find a feud more boring than the pointless Rosie O’Donnell and Donald Trump tiff. And boy did it succeed. Other than Braylon Edwards and Kellen Winslow, there isn’t a soul to start from this snoozefest. By the way, O’Donnel, Trump and Anderson Cooper. May 2007 be a better year.

Tennessee at Buffalo – Vince Young is a Non-LT team kind of player this week. He is a very high risk since he’s still a green quarterback. His stats were terrible last week since he was never on the field. Ultimately, his ability to combine decent passing numbers with rushing stats that approach Michael Vick is what makes him an intriguing play. As I mentioned above, if you need to try to cancel out Tomlinson, you’re going to need something special. Young can be that player, but the downside (last week, for example) is well known.

On the Bills side, Lee Evans and Willis McGahee are both fine starts. The Titans defense has improved somewhat, but they are still very beatable. J.P. Losman is playing at a higher level than earlier in the year, but still shouldn’t be trusted at this late stage.

Washington at St. Louis – This contest should be all about the running backs. The Rams are the 31st-ranked run defense while the Redskins sit at 21st. Clearly, Ladell Betts and Steven Jackson are must starts. Tory Holt has had an immensely disappointing campaign, but if you have him and you’re in your championship game, there’s no way you can bench him. After all, the Redskins have allowed more passing touchdowns than any other team in the league.

Arizona at San Francisco – What to do with the Arizona Cardinals!? Edgerrin James would be a safe play alongside Tomlinson, but I doubt many owners would have both pre-season first round picks. Non-LT teams should only use James as a last resort. His explosiveness is limited. The receiving game remains a baffling one for the Cardinals. Larry Fitzgerald and Anquan Boldin are still a formidable duo, but neither is having a killer season. It’s a good matchup, so I’ll call both second fantasy wide outs, but I’d be surprised if both have good games.

Frank Gore. Gore, Gore, Gore, and Gore. The former Hurricane has lit the league on fire. He’s headed to the Pro Bowl and the 49ers still have an outside shot at a playoff spot. They also have been off since last Thursday, which means Gore’s legs should be feeling better than they have for a while. Umm, he’s a start.

Cincinnati at Denver – After last week’s sub par performance, many owners of Bengals’ players are out of their league’s playoff picture. For the lucky ones that remain, Carson Palmer, Rudi Johnson, Chad Johnson and T.J. Houshmandzadeh are all good plays. The Broncos have not been too adept at stopping opponents from running up nice scores.

The Jay Cutler era seems to be moving along nicely for the Broncos. (Although that may not be right Cutler.) As long as Javon Walker plays, he should put up a good game. Tatum Bell, unfortunately, has been too inconsistent this season. His 18-carry, 29-yard performance last week is a red flag to ever starting him.

San Diego at Seattle – Well, well, well. If it isn’t Mr. Tomlinson. What are we up to, 70 touchdowns now? Luckily for Tomlinson (and Antonio Gates) owners, the Chargers have to play the starters at least one more time this regular season, so there should be no worries of the studs not getting snaps. Unfortunately, after last week, Philip Rivers shouldn’t be trusted in your big game.

Don’t start Shaun Alexander. Even when healthy, this guy is not the same player he was the last five seasons. The Chargers defense is one of the best in the league, and Seattle will probably be playing from behind. Do you really need 20 carries for 75 yards? Matt Hasselbeck is an average option. Expect 225 yards and two touchdowns from him.

Philadelphia at Dallas – I talked about Garcia at the top of the column, but I should also mention this is a revenge game for him. Terrell Owens insulted his manliness by saying he smelled like a rat. Or…something. Anyway, I still expect one or two touchdown tosses from the former 49er. Brian Westbrook is a strong start, and a great non-LT guy since he can fill a stat sheet in multiple ways.

The Cowboys are the Cowboys, which means Tony Romo, Owens and Terry Glenn are worth starts. If you’re feeling lucky, Marion Barber could also succeed against a poor Eagles run defense. Unfortunately, his deficiency in carries makes me wary of starting him in a championship game.

N.Y. Jets at Miami – This is the Monday night game? Let’s face it, if you’re not a Jets or Dolphins fan, fantasy football is the only reason you’re tuning in. Monitor Laveranues Coles’ health. If he’s good to go, he’s a decent start. On the other side of the ball, it appears as if Marty Booker may not play, which means Chris Chambers becomes, perhaps, the most controversial start of the week. He’s probably best suited for non-LT teams, given his penchant for, well, sucking sometimes. Still, his ability to have huge games could make him an equalizer. Basically, you’re swimming at your own risk with Chambers.

Have a happy and safe holiday season filled with fantasy football championships!

By Andy Goldstein
This entry was posted on Saturday, December 23rd, 2006 at 2:01 pm and is filed under Andy Goldstein, FOOTBALL, Gridiron Goldstein. You can follow any responses to this entry through the RSS 2.0 feed. You can leave a response, or trackback from your own site.