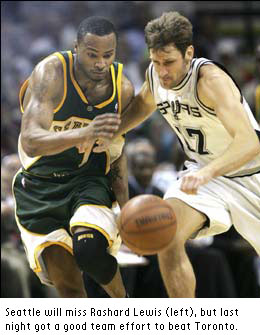 I suppose I should have seen this coming. Maybe I was too excited by back-to-back dramatic victories and five wins over the past six games. Or maybe I was just drunk.

On the surface, Toronto should have been able to emerge from Em City victorious last night. After all, the Raptors were playing their most inspired basketball in recent memory and Seattle had not only dropped six straight, but were going to be without Rashard Lewis, one of its top players, and indeed one of the most underrated players in the game. How could Toronto lose?

What I failed to factor in (probably because of the euphoria of recent Raptor events and too much Christmas cheer) was that this was our fourth game in five nights to wrap up yet another tough Western swing. Of course, who expected a slumping Sonics team to come out with such life, mostly thanks to the return of their superstar, Ray Allen? Allen had been out nine games with a bone contusion in his ankle, didn’t show a hint of rust and, that, combined with some incredibly weak perimeter defense on the part of Toronto, spelled doom on this night as the Sonics came away 110-97 victors.

Seattle decided to shake things up in an effort to snap its season-worst losing skid against the first-place Raptors (damn, even if it’s the Titanic Division, that sounds sweet), as embattled coach Bob Hill tinkered with his lineup. Injuries and ineffectiveness have forced his hand, so he deciced to sit Damien Wilkins, who had been starting for Allen, and insert Earl Watson at the two guard spot. Allen shifted over to small forward for the injured Lewis (out two months after having surgery Friday to repair an injured tendon in his right hand), while Danny Fortson (also back from an extended injury absence) got the start at centre for Andreas Glyniadakis.

The smaller lineup worked against the Raptors, who we must remember are still the possessors of a losing record (12-16) regardless of their lofty perch in the standings.

Allen was money right from the opening tip, and wound up with 28 points on 9-of-15 shooting with six boards and five assists. The dude was absolutely blazing from downtown, draining five of six.

Alright, so here we are, at the X-Mas break, just past the one-third mark of the season. You can’t help but be stoked by how well things have gone considering Toronto has played 18 out of its first 28 on the road, the most in the league. Now, it’s home sweet home for five of the next six and 11 of the next 16. The Raps have a real opportunity to actually build up a lead in the Atlantic with this run over the next month.

By RotoRob
Tags: Toronto Raptors
This entry was posted on Sunday, December 24th, 2006 at 2:30 pm and is filed under BASKETBALL, Game report, RotoRob. You can follow any responses to this entry through the RSS 2.0 feed. Both comments and pings are currently closed.