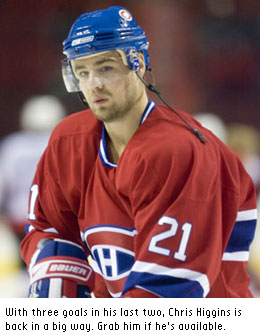 Chris Higgins is back for the Canadiens and he looks like he hasn’t skipped a beat. He may have been dropped in your fantasy league due to his long-term injury, so see if he’s available.

Ilya Kovalchuk decided to shoot for the all-time shots-in-a-game record by firing off 12 last night. That eclipses the 10 and 11 shot nights he had back in October.

Tomas Vokoun should be coming back in the next few weeks. With the way Chris Mason has been playing, you gotta wonder if the Predators are going to be fielding any calls about Mason’s availability. Mason would jump at the chance to be a true No. 1 goalie.

More bad news for Wayne Gretzky — it looks like Ed Jovanovski tweaked his groin, adding to the list of walking wounded in Phoenix.

The Marian Gaborik watch continues. Actually, it hasn’t really gone anywhere since he’s still in “will he/won’t he limbo land.”

Peter Forsberg’s undergoing further tests for his latest concussion, courtesy of Alexander Ovechkin. Could this be the end of the line for Forsberg?

The unpredictable Senators got a wrench thrown into their plans with Jason Spezza’s knee injury against the Lightning. His status is that he’s out “indefinitely” — most likely because it will require some testing to see how bad it is. Still, “indefinitely” is never a good thing.

Who’s flying under the radar? Jozef Stumpel, perennial underachiever, has tallied up six assists in the Panthers’ small winning streak.

You think the Sharks wished they kept Tom Preissing instead of moving him in the Mark Bell three-way trade? Bell’s woes have been well documented here, but Preissing is leading the league in +/- with a +23, while racking up 16 points.

When was the last time a rookie led the league in shorthanded goals? I have no idea, but Jordan Staal popped in another one last night, making that five shorties among his 10 goals this season.

Sidney Crosby’s got a 10-game point streak going on. How long will it last? The Pens line up against the Devils, Thrashers and Leafs next. Look for the Devils to have the best chance at stopping Sid the Kid.

Tuomo Ruutu’s leading the league in shooting percentage at almost 25 per cent. It’s just too bad he’s got one of the lowest shot totals in the league.

By Mike Chen
This entry was posted on Friday, December 22nd, 2006 at 2:08 pm and is filed under HOCKEY, Ice Chips, Mike Chen. You can follow any responses to this entry through the RSS 2.0 feed. You can leave a response, or trackback from your own site.