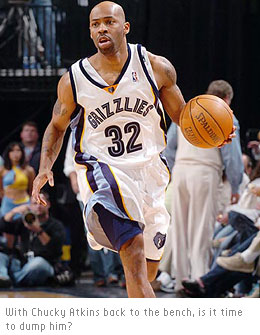 Thanks for the feedback and post.
‘
I’ve got another question if you could help me out here.’I’ve got Sebastian Telfair and Chucky Atkins, but with Telfair’s struggles and Damon Stoudemire back in the starting lineup, I’m thinking of dropping them fast, but there aren’t any good guys left to rack up assists and 3s.’I’m thinking of taking a risk with Jared Jefferies or Gerald Green.’Another risk is either Damien Wilkins or Matt Barnes.’

Which combo of the four would be my best bet to solidify an all around game or at least focusing on 3s, assists and boards? Either that or should I consider holding onto either of my two guys?’I know I’m sacrificing assists so I’m trying to stay comparable to that. Or can you throw some people that are under the radar?’There are 16 teams with 13 players each in my league so pickings are pretty slim. Eric Snow is out there, but he doesn’t give me any 3s.’Any info would be great.’

Telfair has actually been fairly efficient, but I would dump him and pick up Barnes. It’s a risk with Nellie’s constant lineup tinkering, but of the players you mentioned, he’s the best bet to help you right now. Besides, he went crazy with a career game Tuesday, so someone is going to pick him up soon.

Keep Atkins for now’he came up huge on Monday, and although he doesn’t offer many rebounds, he will help you in assists and 3s more than the other players you mentioned. He’s also a top point producer, and while you didn’t mention that you specifically needed scoring, it can’t hurt, right?

Jeffries looked rusty (as expected) in his debut, but he’s going to get the minutes. (Although he’s now been suspended for the next four games, so forget about him this week.)

I’m a big Green fan, and expect him to keep getting better and better, so consider him as an option if you want to take a flyer.

Wilkins can score, but doesn’t offer any help from outside and isn’t a big time assist man.

Here are a few possible players who might be available:

Chris Duhon might be a perfect match for you; Earl Boykins (especially now with ‘Melo out); Damon Jones; Bruce Bowen; rebounders who might be available include Kurt Thomas and Etan Thomas, but neither of them offer help in the other areas you’re looking. Tim Thomas or Ime Udoka could be two who offer across the board help that may be worth a look as well.

Dr. A is saying sell high on Leandro Barbosa…the highest offer’I got in either of my leagues is Manu Ginobili. I figure if everyone stays healthy, at worst it is a lateral move, though Manu is heading in the right direction and Barbosa is spiraling downward as of late…opinion?
‘
Si

Hi Si,
‘
I would take Ginobili over Barbosa if that’s on the table. Barbosa is still capable of putting up points off the bench (18 Saturday), but Ginobili has been money lately, especially from the free throw line.
‘
Make the deal if it’s out there.

Is Gerald Wallace worth anything now?’I got an offer of Deron WIlliams and Wallace for ‘Melo, and I’m thinking it over.’Loved Wallace last year.’What’s holding him back?

I assume this deal is off the table now that Carmelo’s out for 15 games, but let’s deal with the rest of your question.

Wallace got off to a sluggish start because I think the multiple number of minor injuries he’s sustained over the past couple of years have taken their toll on him. This week, he appears to be regaining his scoring touch as evidenced by 19 PPG over the past three, including 31 on Friday.

My man Rob — What do you think about Tim Duncan for Rashard Lewis? I need 3s and it will improve my FT percentage too. I still have Yao Ming and Eddy Curry. Also, I can expand the deal to make it Duncan and Leandro Barbosa for Lewis and Gerald Wallace. That makes me nervous but could pay off big-time.

I like the offense I’m seeing from Duncan this year (another 21 Saturday night), but Lewis is a total stud right now. If 3s is what you needs, this is a super trade for you, assuming you can take the hit in assists. Lewis had another couple of huge games last week, before struggling somewhat the past two. I wouldn’t sweat it; with Ray Allen out, Lewis will get his touches.

That, plus with 3s being the main reason for your deal, I’m not sure I want you to expand it to include Barbosa for Wallace. While Barbosa’s value is slipping of late, he gives you the 3s you need, and you have rebounding galore with Yao and Curry. Plus Barbosa snapped out of it Saturday with a big game. Wallace is starting to roll, yes, but unless you really need his steals, his poor FT percentage will negate the gains you make by dealing away Duncan. Still, I can see how his recent surge would excite you as far as buying low goes.

Thanks for including me in your blog.’I appreciate the shout out.’I ended up going through with the Samuel Dalembert trade for Al Harrington and haven’t been dissapointed/enthused thus far.’Anyhow, I have another question for you, this time’involving Gerald Wallace and Pau Gasol.
‘
My team is

I already offered G. Wallace for Gasol and it was rejected.’I’ve included Walton in the package now for Gasol. What do you think? With Lamar Odom out and the (albeit) long shot of Gerald turning it around, is this a trade I should make (assuming he accepts the offer)?

Thanks and best regards.
‘
Jordan

Sure thing’hope you liked the site.

It looks like Wallace may finally be turning it on. How about that season-high 31 on Saturday, with six boards and three blocks?

Walton is also starting to fill the stat sheet, so yeah, it’s a lot to give up especially while Odom is out.

Gasol, meanwhile, looks like he’s shaking the rust off with 11 (5-for-8) in his second game back Saturday.

Buying low on Gasol and selling high on Walton is smart, but Wallace is the wild card here and it looks like he’s about to explode.

I think given Artest’s wonky back, Peterson’s inconsistent role and West’s injury, you’re better off taking a pass right now.

You could leave yourself really hurting at forward (although Pierce qualifies there too, but that leaves you short at guard), even though getting Gasol would be sweet.

Haven’t talked to you for a while.’How’s it going?

I have a trade proposed by one of my colleagues. He is willing to part with AK-47 for Rasheed Wallace.’

Can you tell me about this proposal?

While this seems like a good deal because you’re still buying kind of low on Kirilenko and Wallace is hurting right now (although he’s expected back Thursday), I’m not sure I like it that much.

The thing is, blocks are the main strength of each of these players, but Wallace will help you more in scoring and especially in 3-pointers (check out what he had done lately before sitting out). Kirilenko is a defensive beast and he won’t hurt you in assists the way Wallace will (so if this is a weak area on your team, then it makes bringing in AK-47 a smarter move), so the deciding factor is whether you can take the hit in 3-pointers and scoring by dealing Wallace away.

Just on the surface, it’s a risky deal.

Thanks for all the help before. The guys in my league are trying to low ball Carlos Boozer now and I just told them to get lost and that I’m not interested. They are close friends but they don’t know shit about fantasy basketball. I tried to veto this trade (before T-Mac was out), but it was McGrady for Michael Redd. But now I really wish I would have made a move with Lamar Odom.

But my question is should I drop Odom for a couple of weeks or would it be smarter to hold onto him? One of the guys in my league already picked up Shaquille O’Neal so I am thinking I might need to hold onto Odom for fear that one of the other teams will pick him up. And I still am holding onto Gerald Wallace hoping that he will come around, but not seeing it should I drop him?

I know Adam Morrison went back to the bench finally, but he is still shooting the ball a ton of times. Can you tell me what the coach is thinking letting a player that shoots 38 per cent shoot the ball more than three times a game? Any help would be needed.

Do not drop Odom. We’re talking about one of the best across-the-board fantasy studs in the game. Even if he’s out for a month, he’s worth hanging onto.

As for Wallace, who apparently is on everyone’s mind this week, it looks like he is awakening with a season-high 31 the other night, so you might want to hold off on that.

I know Morrison is struggling lately (especially at home), but where is Charlotte going this year? This guy is part of the Bobcats’ future (with Emeka Okafor, Sean May and Raymond Felton), so they have to keep putting him out there and let him work his way through the rookie ups and downs. This isn’t like some rook trying to break in on the Spurs.

By RotoRob
This entry was posted on Monday, December 18th, 2006 at 7:58 pm and is filed under BASKETBALL, Dear RotoRob, RotoRob. You can follow any responses to this entry through the RSS 2.0 feed. You can skip to the end and leave a response. Pinging is currently not allowed.