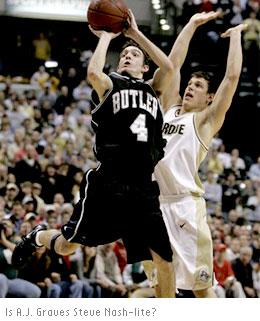 One of the biggest surprises in men’s college basketball kept rolling yesterday as Butler recovered from its only loss of the season to down Purdue 68-65 in the opener of the annual Wooden Tradition at Conseco Fieldhouse in Indianapolis.

The Bulldogs, ranked 18th in the nation, continued their dream season with yet another victory over an Indiana state rival school. While Butler lost last weekend to Indiana State, it has already beaten Notre Dame and Indiana. Adding a win over the Boilermakers — who with six straight wins were bubbling under just below the Top 25 and had beaten Butler 12 of the past 13 times heading in — is yet another cherry on the sundae for the Bulldogs. This marks the first time since 1948-49 that the ‘Dogs managed to sweep the big three Indiana schools.

This is a team that was picked in the preseason to finish sixth in the Horizon League, yet at 11-1 now, it could move into the Top 15 this week.

You knew something special was going on with Butler when they won the NIT Season Tip-Off Championship. What I’m loving about this squad is how they are amazingly calm under pressure. Each time Purdue made a run and either cut the deficit or, on several occasions, took a slim lead, Butler would come up with a huge play to regain the advantage. It looked like the game would slip away late after back-to-back turnovers, but the Bulldogs managed to grab the lead in the final minute and they clamped down for the win.

By RotoRob
This entry was posted on Sunday, December 17th, 2006 at 2:48 pm and is filed under BASKETBALL, On Campus, RotoRob. You can follow any responses to this entry through the RSS 2.0 feed. You can skip to the end and leave a response. Pinging is currently not allowed.